Get Ready For CD-8, Colorado 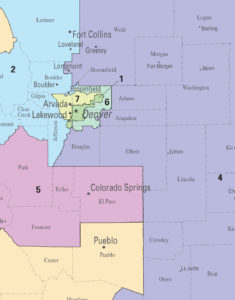 As the Wall Street Journal reports:

The figures from the Census Bureau measure changes to state populations for the year ended July 1. Because they come less than a year before the next decennial census, they are a close approximation for which states will gain and lose congressional seats and electoral votes based on the 2020 count that gets fully under way this spring.

It’s been known for some time now that Colorado was likely to pick up an additional seat in Congress following the 2020 Census, and the new figures from the Census Bureau out today move the needle further from possible to probable. Ex-Denver Post reporter Nic Garcia previewed the coming 2022 free-for-all back in August:

Depending on how the lines are drawn, it could feature any number of high-profile Democrats from the Front Range. Given the churn that term limits create at the statehouse, lawmakers looking to move up usually have to wait until someone dies or retires to head to Washington. So this will be a once-in-a-political-lifetime chance for a Colorado politician to head East.

The enormous population growth in Colorado in the last decade, particularly the Front Range urban corridor and suburbs of Denver, makes some kind of further division of the metro area to accommodate a prospective CD-8 the most likely scenario. That’s good news for Colorado Democrats based on recent election results, particularly the end of ticket-splitting in suburban CD-6 that kept GOP Rep. Mike Coffman in office well past his expiration date.

And yes, assuming the state’s blue trajectory in recent years holds course, just about any way it’s drawn we expect the action for CD-8 will be in the Democratic primary. There simply aren’t enough Republicans to go around anymore.