“The Happy Warrior Has Become a Car Salesman” 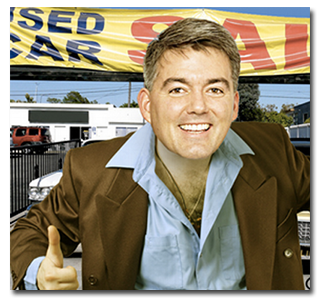 The latest U.S. Senate prognostication from the Cook Political Report’s Jennifer Duffy declares the Senate majority very much in play as 2019 comes to a close, which most readers already know–and that Colorado’s incumbent GOP Sen. Cory Gardner is one of several must-win swing races expected to decide the majority in the 2020 elections.

The Senate math hasn’t changed. If Democrats want to win the majority, they need a net gain of three seats if they win the White House or four if they don’t. There are only two Democratic-held seats in jeopardy: U.S. Sens. Doug Jones in Alabama and Gary Peters in Michigan. It is hard to see how Republicans expand the playing field beyond these two races…

Republicans have three seats in Toss Up: U.S. Sens. Martha McSally in Arizona, Cory Gardner in Colorado, and Susan Collins in Maine. Of the three, many Democratic strategists believe that Colorado is more vulnerable than the other two. It certainly leans more Democratic. Presumptive nominee, former Gov. John Hickenlooper, hasn’t had an easy time. He is getting challenged from the left, has committed a couple of gaffes, and is the subject of an ethics investigation that will be the subject of a March hearing. Still, Democrats say that voters understand that Hickenlooper is quirky, while they believe that Gardner isn’t the Senator they elected in 2014. To paraphrase one strategist, the Happy Warrior has become a car salesman. [Pols emphasis]

In fairness, Duffy then claims that “Gardner has a record of legislative accomplishments on which to run, which GOP strategists contend will carry more weight with voters.” But her description of how Colorado voters have become disenchanted with Cory Gardner’s relentless affected positivity, while delivering the same tired Republican talking points they hear everywhere else, sums up well the dilemma for Gardner the polls also show. Any complacency among local Democrats that may have existed in 2014 is long gone, and five years of Gardner fronting unpopular Republican policy goals–and now Donald Trump himself–have stranded Gardner on the wrong side of an alienated electorate.

That is why Democrats’ road to the Senate majority next year runs through–arguably starts in–Colorado.