UPDATE: And then there’s Rep. Doug Lamborn (R-Colorado Springs), the dope of the Colorado delegation:

Rep. Lamborn twice suggests that Obama sought help from the Russians in the 2012 election.

But Obama’s remarks — “After my election I have more flexibility” — never requested help from Russia. #copolitics pic.twitter.com/LCGgcXtbyq 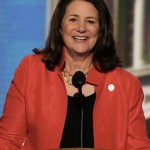 When the speaker’s gavel bangs in the U.S. House of Representatives on Wednesday morning to debate the impeachment of President Donald Trump, that gavel will be held by a Denver Democrat.

U.S. Rep. Diana DeGette will preside over the House’s third impeachment debate and vote in American history, granting her a front-row seat to a chapter of that history. The Democrat-held House is expected to vote on two articles of impeachment Wednesday: abuse of power and obstruction of Congress.

I am honored that the speaker has asked me to serve as speaker pro tempore of the House and to preside over most of the impeachment debate. None of us came to Congress to impeach a president, but every one of us – when we assumed office – took an oath to uphold the constitution. This is a sad and somber moment in our nation’s history and the responsibility to preside over this important debate is something I will not take lightly.

It’s certainly not the first time in Rep. DeGette’s over two decades of service in Congress that she’s held the gavel, but presiding over the expected vote today to impeach President Donald Trump is an act that all by itself adds a bullet point to DeGette’s entry in the annals of American history. It’s an undeniable honor, and politically it’s good for DeGette in Colorado’s true-blue First Congressional District.

At the same time, nobody’s happy to be part of an impeachment process–or at least they shouldn’t be. However necessary this process may be, it’s not a cheerful one. The basis for these impeachment proceedings are actions committed by the President that have endangered our democratic process, and validated the worst fears of those who warned back in 2016–correctly–that Trump welcomed foreign manipulation of American elections on his behalf.

With that said, it’s always good to see one of our own making history.