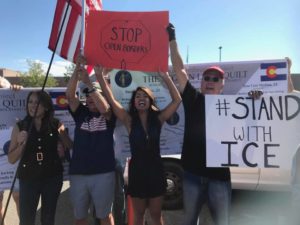 Michelle Malkin at a recent pro-ICE rally in Aurora attended by GOP lawmakers.

Our friends at Right Wing Watch took note of an appearance last week by Colorado Springs-based national columnist and hard-right conservative agitator Michelle Malkin on the Youtube program hosted by Vincent James–a guy apparently unhappy with the “white nationalist” label he’s been saddled with, though it’s hard to see how he’s not exactly as advertised:

Michelle Malkin appeared on the YouTube channel of prominent white nationalist content creator Vincent James on Tuesday, where she applauded young alt-right supporters for having “come to the epiphanies that for me took a long time in the making.”

It appears that Malkin, after becoming a pariah among mainstream conservatives, has decided to lean into her support among the far-right.

Writers and members of the mainstream GOP began distancing themselves from Malkin after she explicitly endorsed anti-Semitic and white nationalist YouTube political personality Nicholas Fuentes in a speech at UCLA in November. Subsequently, Young America’s Foundation cut ties with Malkin. Washington Examiner’s Tiana Lowe chided Malkin for affiliating with racists “because [Malkin] sees them as the most potent allies available to back a militantly xenophobic agenda.” Jonathan S. Tobin wrote in the New York Post that Malkin “thinks these haters are allies in a crusade to halt all non-European immigration (ironic, since Malkin’s parents were Filipino immigrants).”

With more than 170,000 followers on Facebook, videos (hosted by founder Vincent James Foxx, who always wears a “Make America Great Again” hat and uses as a backdrop a pistachio-green wall) sometimes reaching millions of views, and reporters spread across the country, the Red Elephants continues to spread. Alt-right figures such as Kyle Chapman (a.k.a. “Based Stickman”) and Tim Gionet (a.k.a. Tim Treadstone or “Baked Alaska”) regularly share Red Elephants coverage, and 43rd Congressional District candidate Omar Navarro regularly uses it as a platform. The collective’s main claim to fame is livestreams of events that are transformed into glitch-heavy videos that depict the Left as the sole aggressors in political clashes, which, for Red Elephants, justifies the violent reactions of the alt-right…

Being mere Trumpbros wasn’t enough, though. They took the conspiracy theories of Infowars, the fake news of Breitbart, added a bit of Holocaust denial (Foxx once said on a livestream that “no residue of cyanide was found on ANY of the walls of any of the ALLEGED gas chambers” [Pols emphasis]) and anti-semitism (people the reporters don’t like get the “(((echoes)))” motif used by neo-Nazis to identify Jewish journalists). There are also puff pieces about the likes of white nationalists Nathan Damigo and Jason Kessler. When a Facebook user commented earlier this year that there were “white supremacists in your movement,” an admin responded, “The Left has communists in theirs. Do they kick them out? Nope.”

If it seems like Vincent James would be right at home with alleged Nazi radio producer Kirk Widlund at 710 KNUS talk radio, you’re probably on to something.

Malkin may be losing credibility with “mainstream” conservatives nationally, as RWW suggests, but we’ve seen nothing to suggest any daylight between Malkin and the highest ranks of the Colorado Republican Party. House Minority Leader Patrick Neville was excited to attend September’s “stop open borders” rally (photo top right) with Malkin at the ICE detention center in Aurora along with Colorado GOP vice-chair Kristi Burton Brown. Since moving to Colorado Springs over a decade ago, Malkin has become one of the more popular conservative luminaries in the state, a regular speaker at GOP events and the Western Conservative Summit.

Whether Malkin is a trendsetter or just a symptom of the GOP’s slide toward the darkest corners of the fringe in recent years, it’s getting harder to deny such a slide is happening.