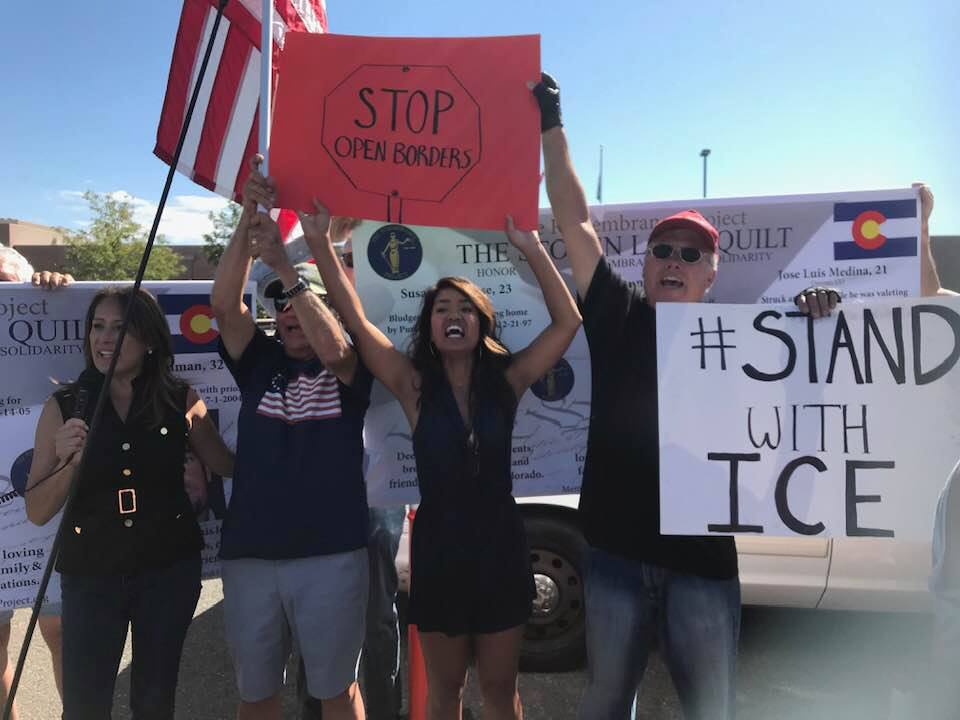 Yesterday, a group of well over 100 right-wing demonstrators converged on the Immigration and Customs Enforcement Aurora Contract Detention Facility–a jail near I-70 and Peoria Street with a capacity of around 1,500 people that has been the scene of numerous rallies and protests in recent months as President Donald Trump’s controversial immigration policies have filled such facilities across the nation.

Up until yesterday, almost all of the protest activity outside this facility was in the form of pro-immigrant activists demonstrating against abuses taking place inside and Trump’s  punitive handling of asylum seekers arriving at the southern border. Yesterday, the scene was very different: a protest led by anti-immigration firebrand Tom Tancredo along with right-wing columnist Michelle Malkin, GOP House Minority Leader Patrick Neville, and far-right AM radio host Randy Corporon. After a protest in July resulted in the American flag outside the facility being temporarily replaced with a Mexican flag, conservatives vowed to turn out in similar force to “Stand With ICE.”

Whether or not you agree with President Trump’s nativist agenda of reducing both legal and undocumented immigration, there’s a significant moral disparity between protesting outside a detention center in solidarity with the people incarcerated inside versus protesting against those prisoners. Protesters claim to be there “in support of ICE”–but on Labor Day there were mostly contract prison guards on hand, not federal employees. There were, on the other hand, hundreds of detainees and visitors at the facility watching. It’s fair to conclude therefore that the detainees and their supporters were the real audience, and that sends a very different message.

Does it take courage to stand outside prison walls and intimidate the people held inside? People who have in most cases committed no greater crime than crossing the U.S. border to escape conditions no American would ever tolerate? The answer, wherever you stand on immigration, should be a resounding no.

This was Colorado putting our worst foot forward.