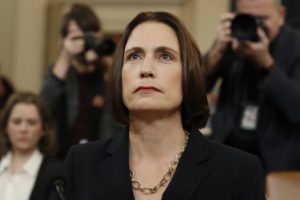 Fiona Hill, a former member of President Trump’s national security team and an advisor on Russia, is testifying publicly today as part of impeachment hearings into Trump’s bribery scandal with Ukraine. Hill also took her opportunity in front of the cameras to push back against Republican conspiracy theories that Ukraine, and not Russia, interfered in the 2016 U.S. elections — ideas that are being promoted by the ranking Republican member of the House Intelligence Committee, Rep. Devin Nunes.

“This is a fictional narrative that has been perpetrated and propagated by the Russian security services,” Hill said in her opening statement.

The statement amounted to a rebuke of President Trump; Rep. Devin Nunes (Calif.), the top Republican on the House Intelligence Committee; and others who have advanced claims that it was Ukraine — and not Russia — that waged information warfare against the United States in 2016.

“Some of you on this committee appear to believe that Russia and its security services did not conduct a campaign against our country,” she said.

Hill’s testimony sets the stage for an extraordinary development in the impeachment hearings, with Trump’s former top adviser on Russia essentially telling the public under oath that his refusal to accept the reality of Moscow’s intervention in 2016 is wrong.

“The unfortunate truth is that Russia was the foreign power that systematically attacked our democratic institutions,” Hill said. “It is beyond dispute.” [Pols emphasis]

Nunes and other Republicans have continually sought to sow Ukrainian conspiracy theories into impeachment testimony. On Wednesday, Nunes said point-blank that Democrats “got campaign dirt from Ukrainians in the 2016 election” and “were heavily involved, working with Ukrainians, to dirty up the Trump campaign.”

Hill’s statements today are another black eye for Nunes, a staunch Trump ally who has played the role of a bumbling fool for much of the impeachment process. As Salon.com reports, Nunes’ opening statement on Wednesday — prior to the explosive testimony of EU Ambassador Gordon Sondland — indicated that he was completely unprepared for the day’s testimony:

Nunes began by comparing the Democrats’ impeachment push to former special counsel Bob Mueller’s probe, listing off numerous charges that although he dismissed at false were actually proven true.

“Trump had a diabolical plan to build a Trump Tower in Moscow,” he said. (True.) “Trump changed the Republican National Committee platform to hurt Ukraine and benefit Russia,” he added. (True.) “Trump’s son-in-law lied about his Russian contacts while obtaining his security clearance,” he continued. (True.)

Nunes then went on to claim that Democrats were again pushing false charges in the Ukraine case.

“When the Democrats can’t get any traction for their allegations of a quid pro quo, they move the goalposts and accuse the president of extortion, then bribery, and as a last resort, obstructing justice,” Nunes said, moments before Sondland explicitly described a “quid pro quo.” [Pols emphasis]

Nunes has, in fact, turned into something of a Trump clone. He has devoted much of his time during impeachment hearings to floating miscellaneous conspiracy theories and attacking the media. As CNN’s Chris Cillizza notes, Nunes appears to be concerned only with how he appears to President Trump.

Is all of this obfuscation and verbal nonsense from Nunes actually working in Trump’s favor and weakening the case for impeachment? As The Hill explains, pictures tell the story better than anything Nunes can say. This brief montage from The Daily Show works even better:

Nunes had a bad day pic.twitter.com/PRfzzDlJ6y