Sen. Cory Gardner’s (R-CO) recent fundraising letter attempts to scare Coloradans into donating to his reelection campaign by using extremely partisan language at odds with his claims of being a moderate, bipartisan dealmaker.

Toward the end of a four-page letter mailed to prospective donors, Gardner explains his need for money in extreme (though poorly copy-edited) language: 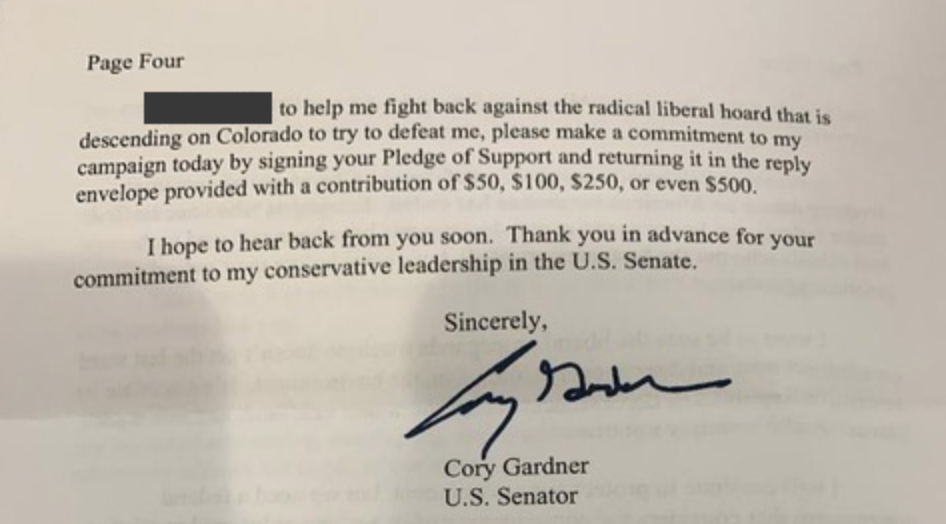 “To help me fight back the radical liberal hoard [sic] that is descending on Colorado to try to defeat me, please make a commitment to my campaign today…” writes Gardner.

It’s unclear which Coloradans specifically Gardner is referring to as part of the “radical liberal [horde] descending on Colorado,” but at the very least he includes his potential challengers, the two most prominent of whom (Hickenlooper and Romanoff) have lived in Colorado for decades. His language also invokes a longtime conservative complaint about liberal Coloradans who moved here from other states and shifting the political demographics.

An email to the Gardner campaign requesting clarification of whom he considers to be part of the “radical liberal [horde]” was not immediately returned.

In the postscript, Gardner continues to warn of “radical liberals” and of Democrats’ desire to institute socialism.

“They want to destroy me and elect a radical liberal to work with Schumer and Pelosi in Washington, D.C.,” Gardner writes.

Since joining the Senate in 2014, Gardner has co-sponsored multiple bills with Minority Leader Chuck Schumer.

Gardner has been using the anti-socialism talking point all year long. In January he said on talk radio that the “normalization of socialism was the most dangerous thing to come out of the 2016 election.” His speech at the Western Conservative Summit in July, not only returned to the threat of socialism, but anticipated it being questioned as political rhetoric. As reported by the Denver Post’s Justin Wingerter:

“‘While the left will cry out that Republicans are fear-mongering and using socialism as a scare tactic, that actually couldn’t be further from the truth,’ Gardner said, preemptively criticizing criticisms of him.”

More from the postscript:

“…the future of Colorado and our entire nation depends on stopping the Democrats’ drive to initiate socialism in America.”

“I will take the fight to Democrats by making whoever [sic] they put up against me defend the radical liberal policies, socialist programs, and restrictions to our Constitutional rights…”

The language is distinctly different from the work-across-the-aisle bipartisan image Gardner promotes in his official capacity. His office has issued press releases announcing various awards for working with Democratic colleagues. And while a close look at the criteria for some of those awards sometimes reveals very narrow metrics, the public image of a congenial and cooperative member of Congress is clearly something Gardner values. 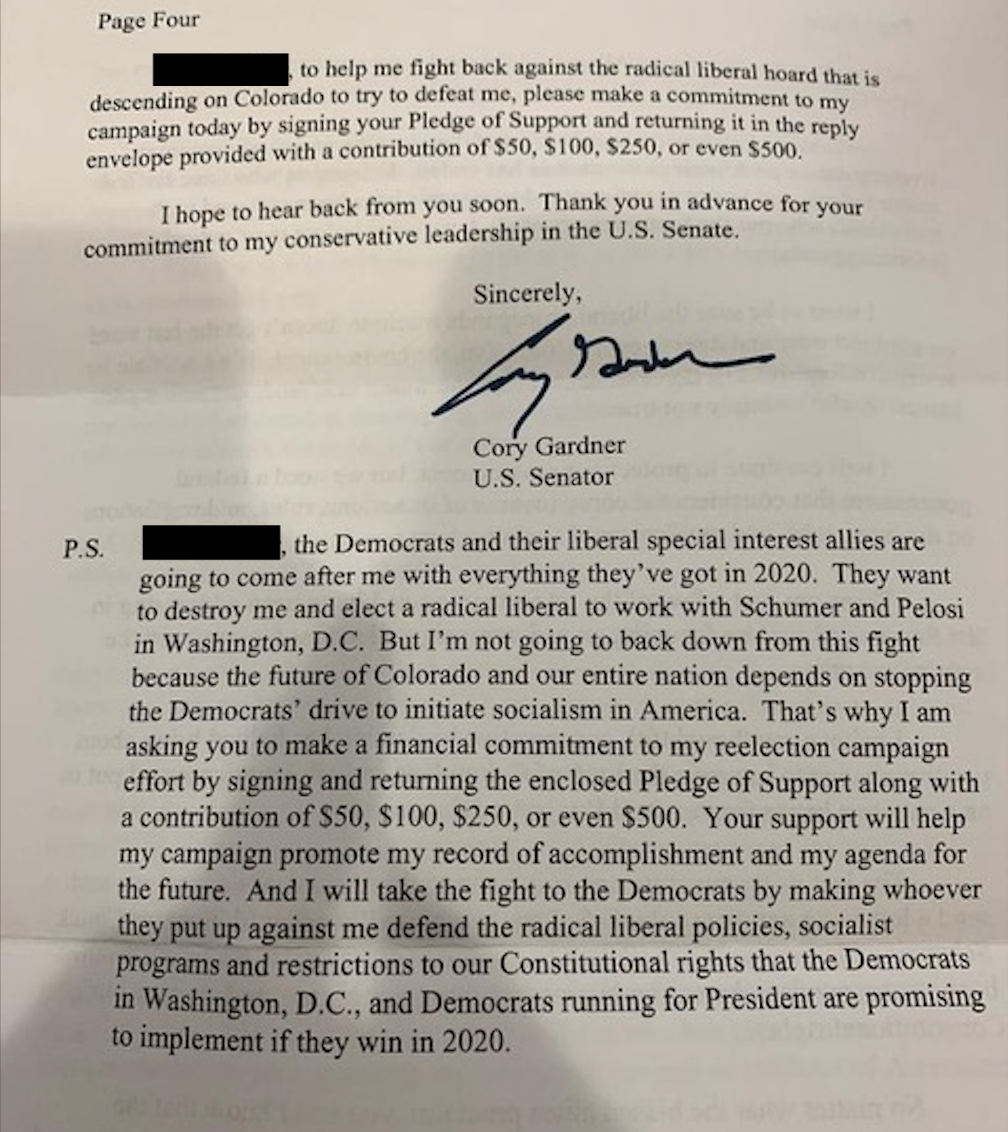 “These Trumpian talking points are just another example of how Senator Gardner has failed to live up to his own promise to be an independent voice for Colorado. He knows his record of working to eliminate protections for pre-existing conditions and allowing the president to raid $8 million from Peterson Air Force Base is toxic so has to resort to these ridiculous tactics.”

Gardner’s inflammatory language inspired La Plata County resident Greg Phillips to write a letter to the editor of the Durango Telegraph, in which he lamented the partisan attacks of modern political culture and wondered if it is possible for all Coloradans to “reverse the divisiveness.”