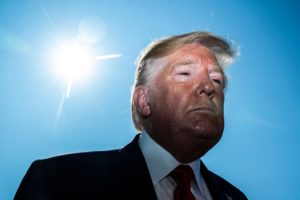 If Trump believed in Climate Change, he’d have something else to blame for all of this heat.

The second day of public testimony on impeachment hearings against President Trump took a very Trumpian direction today. As the Associated Press reports:

Former U.S. Ukraine Ambassador Marie Yovanovitch provided chilling detail Friday in Trump impeachment hearings of being suddenly ousted from her post and feeling threatened upon learning President Donald Trump had denounced her in a July phone call with Ukraine’s president. In that call, Trump assailed her as “bad news” and said she was “going to go through some things.”

In an extraordinary moment, even in an administration filled with them, Trump himself went after her again as she spoke, tweeting from the White House that everywhere she served had “turned bad.” He emphasized that as president he had the “absolute right” to appoint his own ambassadors…[Pols emphasis]

…After Trump’s tweet on Friday, the chairman of the House Intelligence Committee swiftly intervened, halting the questioning to read the president’s comments out loud to the witness — and Americans following the hearing — during a live broadcast across the country.

“Ambassador Yovanovitch, as we sit here testifying, the president is attacking you on Twitter,” said Democratic Rep. Adam Schiff of California. “What effect do you think that has on other witnesses’ willingness to come forward and expose wrongdoing?”

But don’t worry about any of this; the White House issued a statement saying that President Trump’s Tweets are “not witness intimidation.” Trump himself later defended his Tweets by saying, “I have freedom of speech, just like other people do.”

It’s hard to think that a person could be handling this any worse, but if anybody can find a way…