Today, the Resist Polis PAC, which claimed to have collected hundreds of thousands of signatures but didn’t turn in any, re-launched as Colorado Freedom Force, with renamed Facebook groups and a new website complete with a new donation page. Divisions between the various recall entities, however, are presenting challenges for the new group’s organizing and fundraising plans.

Resist Polis PAC has rebranded its regional chapter Facebook groups and shared the new website on each page, encouraging supporters to join the new email list and donate anonymously:

“Today, the most important step you can take is to join our force by adding your name. Join the Force – Click Here. This is the very best way to stay up to date with what’s going on in Colorado.

The second most important step would be to chip in to our cause. As a 501(c)4 organization, your contribution will remain anonymous, and there is no limit as to how much you can give.”

In the statewide Facebook group, several commenters expressed skepticism, questioning the group’s purpose and noting that they felt like their previous donations had been wasted. Lewis pushed back, asking to which of the two Polis recall groups the commenters had contributed money and specifying CFF’s anticipated activities.

According to Lewis, the CFF will organize in a variety of ways:

“Colorado Freedom Force is essentially a grassroots army of people throughout Colorado who are willing to take action to protect their freedoms. That may be through signature-gathering efforts (initiatives, referendums, or recalls), testifying at the Capitol, or educating voters about candidates and ballot measures.”

Cook stressed the largely volunteer nature of the Recall Polis group and explained that CFF hopes to continue mobilizing that grassroots enthusiasm. “We had so many volunteers, and they weren’t partisan, they weren’t all conservatives or even really active in politics.” She noted that those like Lewis who had professional expertise to help the group would get paid, as they could provide services at a reduced rate.

The committee also paid a $2,300 fine to settle a campaign finance complaint over its solicitation of $19.99 “Polis Penny” donations, which offered a penny in return for a $20 donation, thereby avoiding the donor reporting requirement.

Lakewood resident Nancy Pallozzi, who nominally led the attempt to remove Sen. Pettersen, is Colorado Freedom Force’s registered agent. Joining her is Resist Polis PAC board member and El Paso County leader Kristina Finley, who worked on both the Polis recall and that of Sen. Lee. None of the recall attempts resulted in a single signature submitted to the Secretary of State. 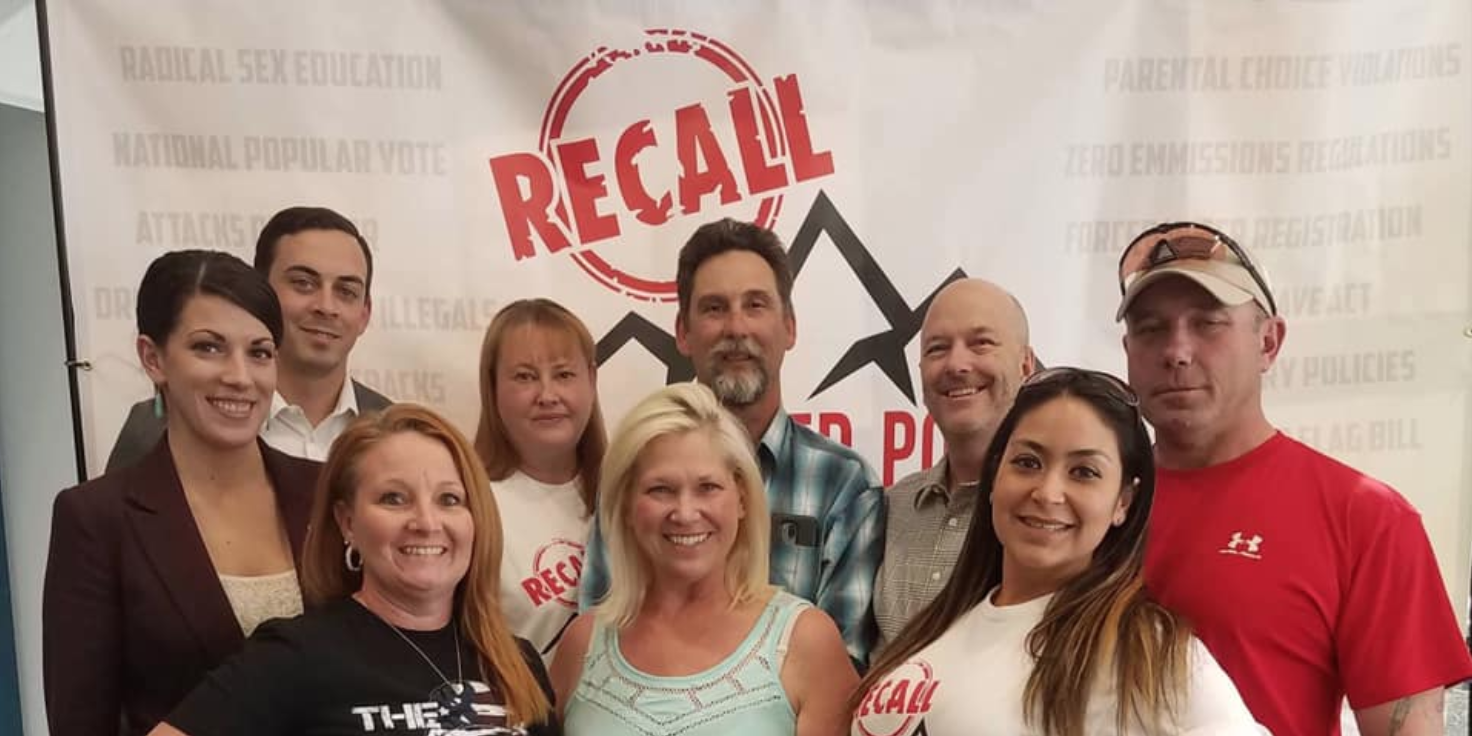 According to its registration document, the group’s purpose specifically mentions only one activity: recalls.

“To defend Coloradans’ freedoms and constitutional rights by supporting certain efforts of the Colorado Freedom Force, including the recalls of local and statewide elected officials, regardless of party affiliation so we can live free and prosper.”

Spokeswoman Jan Cook talked about continuing to build on the enthusiasm surrounding the Recall Polis effort:

They built a network of storefronts and volunteers and the movement transcended party. Nobody talked party; everyone talked policy and issues. It was really eye-opening to see how many were concerned with the direction Colorado was going. I was seeing people I had never seen at political meetings before.

Unfortunately for the organizers, another recall group, Dismiss Polis, took possession of the list of Colorado voters who signed the recall Polis petition and isn’t sharing that information with Colorado Freedom Force. 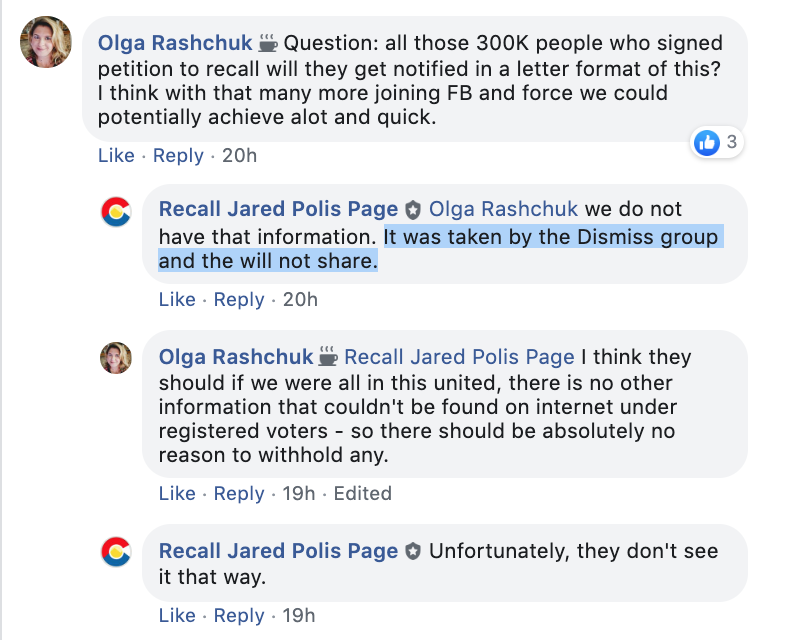 CFF stakes out policy positions on seven hot-button issues, some of which are a response to legislation of ballot measures, and some of which are conservative talking points. Five of the seven were listed on the first Recall Colorado website, launched by House Minority Leader Patrick Neville (R-Castle Rock) back in March. Added to those original five are “attempts to destroy the Taxpayer’s Bill of Rights” and “forced single-payer health care statewide.”

“We are preparing for the 2020 legislative session. Every county is growing their volunteer base. It’s very likely that the Force will spearhead a referendum or initiative to undo controversial legislation pushed through the Legislature.”

Another activist expressed concern over vaccinations and flu shots, to which Lewis responded that they plan to “fight the vaccination bill.” 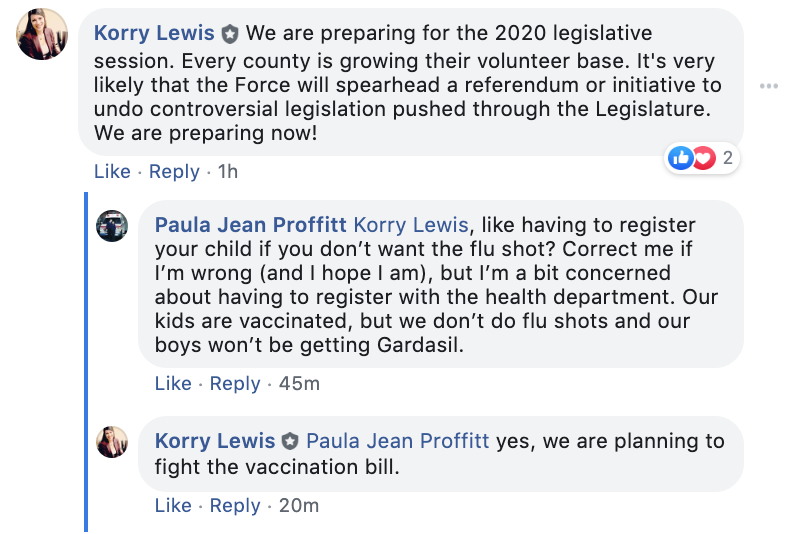 Gardasil is the vaccine that prevents the spread of the Human Papillomavirus (HPV). The Center for Disease Control recommends all 11 and 12 year-olds be vaccinated for HPV to guard against contracting possible HPV cancers later in life.

While Colorado Freedom Force’s priority issues cover a very broad range of policies, within the Facebook groups, posts about sex education “indoctrinating children” and vaccines are the most prominent.

Many posts still focus largely on Governor Polis, often linking the issue of his sexuality to policy positions. Some, like this one, imply predatory intent, much in the same way the CFF policy page assert that “radical sexual education indoctrinates our children.”

Cook noted that of the grassroots activism she was involved with at the Capitol last session, the vaccine moms and the parents concerned about the comprehensive sex education bill were the most engaged. Some of their fears about children being taught gay sex were due to misinformation disseminated by religious right groups including Alliance Defending Freedom, the Centennial Institute and Focus on the Family.

Most recently, Cook says the group channeled its efforts into opposing Proposition CC, and hopes to build off that success to “reject the social agenda in Colorado.” She says group leaders plan to be speaking at local events and on talk radio in order to “build the army.”

We the people of Colorado, resist the socialist assault on our personal liberties and the rule of law, and are united in a coordinated effort of legislative action and strategic engagement, with an unwavering commitment to preserve and strengthen our children’s rightful inheritance of economic opportunity and constitutional liberty.