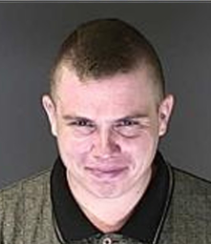 Richard Holzer allegedly met undercover agents Friday at a motel with plans to ignite explosives at Temple Emanuel in the wee hours of the morning. The undercover agents brought two pipe bombs and 14 sticks of dynamite that Holzer intended to use on the synagogue. He brought a knife, a mask and a copy of “Mein Kampf” with him, the affidavit said.

He called the plan his “mountain” and referred to Jews and the synagogue as a “cancer,” according to the affidavit.

“Like, this is a move for our race,” the affidavit quotes Holzer as saying to agents at the motel. “One of these days, we’re probably gonna do something where one of us, couple of us even, probably won’t come back.”

Denver7 reporting, thank goodness we’re reading about an arrest instead of something much worse:

A white supremacist from Pueblo was arrested Friday when he met up with three undercover FBI agents in an attempt to bomb the Temple Emanuel synagogue in Pueblo as part of what he called a “racial holy war” and to wipe the synagogue “off the map” in what the FBI says amounts to “domestic terrorism.”

Richard Holzer, 27, will make his first court appearance at 2 p.m. Monday at the U.S. District Court of Colorado. Court records show he faces one count of attempting to obstruct religious exercise by force using explosives and fire.

According to a criminal complaint , undercover FBI agents had been talking with Holzer since September and had been tracking multiple Facebook accounts of his in which he talked to other white supremacists through private messages about attacking Jewish people and other minority groups.