Get More Smarter on Wednesday (October 23)

The Denver Nuggets open the 2019-20 NBA season tonight in Portland. Now, let’s Get More Smarter. If you think we missed something important, please include the link in the comments below (here’s a good example). If you are more of an audio/visual learner, check out The Get More Smarter Show or The Get More Smarter Podcast. And don’t forget to find us Facebook and Twitter.

► Congressional Republicans understand that they don’t have much of a substance argument in opposition to impeachment proceedings against President Trump, so they’ve increasingly been focusing their attacks on the “process” aspect of the investigations. On Wednesday, House Republicans — led by members of the so-called “Freedom Caucus” — stormed into a secure committee room and temporarily delayed testimony from Pentagon official Laura Cooper.

These Republicans, led by Trump attack dog and Florida Rep. Matt Gaetz, are not allowed in the committee hearings BECAUSE THEY ARE NOT MEMBERS OF THE COMMITTEE. As the New York Times explains:

The lawmakers — most of whom do not sit on the committees conducting the inquiry and are therefore not entitled to attend its hearings — said they were protesting the closed-door nature of the proceedings, which have been open to members of both parties who sit on the committees. The private question-and-answer sessions have produced a stream of compelling testimony from government witnesses, much of it confirming and expanding on the intelligence whistle-blower complaint that touched off the impeachment inquiry.

Republicans are hammering Democrats for limiting attendance at the hearings to members of the Intelligence, Judiciary and Foreign Affairs Committees. It is common practice for sensitive congressional investigations to be conducted behind closed doors, at least in their preliminary stages. House Republicans did just that when they controlled the chamber and opened an inquiry into the 2012 attack on the United States embassy in Benghazi, Libya. [Pols emphasis]

Democrats have said they plan to hold open hearings after the committees finish deposing witnesses, and that they intend to make public complete transcripts of witness testimony after they have been reviewed to determine whether they contain any classified material. Democrats argue that, lacking any defense of the substance of Mr. Trump’s actions, Republicans are attacking them over process.

The facts do not seem to support the argument of Congressional Republicans, including Rep. Ken Buck (R-Greeley).

► As The Washington Post reports, Republicans may be taking extreme measures in attacking the impeachment “process” because recent testimony looks very ominous for President Trump:

The impeachment inquiry into President Trump took an ominous turn for the president yesterday with the explosive testimony on Capitol Hill of a career civil servant.

William B. Taylor Jr. — a lifelong diplomat under both Republican and Democratic administrations who came out of retirement to take the acting chief diplomatic role in Ukraine — appears to have inflicted grave wounds to Trump’s claims there was no quid pro quo in holding back U.S. military assistance from Ukraine in exchange for help from that government in investigating the president’s political rivals.

“It is no longer a question of whether this happened. It is now a question of how the president explains it and how lawmakers — especially Republicans — choose to respond to it,” as my colleague Dan Balz put it. “Taylor’s prepared testimony documents with precision and clarity what he heard, saw, wrote and was asked to respond to over a period of weeks. In his telling, the squeeze on Ukraine, and Trump’s role in it, goes well beyond a single phone call July 25 between the U.S. president and Ukrainian President Volodymyr Zelensky. Trump’s long-standing characterization that there was no quid pro quo runs smack into evidence to the contrary.”

Politico has more on the Republican realization that they don’t have much left to stand on in the battle against impeachment.

► As Colorado Public Radio reports, lawmakers agree that Colorado needs to change how it funds public schools…but they don’t agree on how to get there.

► As the New York Times reports, more than a million lower-income children have been dropped from the rolls of Medicaid and the Children’s Health Insurance Program (CHIP) in the last 18 months.

► President Trump famously said that he was so popular that he could “stand in the middle of Fifth Avenue and shoot somebody” and it wouldn’t cost him any support. On Wednesday, a Trump attorney actually made this argument in a courtroom. From The Washington Post:

President Trump’s private attorney said Wednesday that the president could not be investigated or prosecuted as long as he is in the White House, even for shooting someone in the middle of Fifth Avenue.

The claim of “temporary presidential immunity” from Trump’s private attorney William S. Consovoy came in court in response to a judge’s question that invoked the president’s own hypothetical scenario. As a candidate in 2016, Trump said his support was so strong he could “stand in the middle of Fifth Avenue and shoot somebody” and not “lose any voters.”

The president’s lawyer was asking the U.S. Court of Appeals for the 2nd Circuit to block a subpoena for Trump’s private financial records from New York prosecutors investigating hush-money payments made before the 2016 election. The judges seemed skeptical of the president’s sweeping claims of immunity not just from prosecution, but also from investigation…

…“Local authorities couldn’t investigate? They couldn’t do anything about it?” asked Judge Denny Chin, adding, “Nothing could be done? That is your position?”

“That is correct,” Consovoy answered emphasizing that the immunity applied only while Trump is in office.

You don’t need to be an attorney to understand the absurdity of this argument.

► As Chris Cillizza writes for CNN, only seven Republican Senators will admit that they have already made up their mind to protect President Trump from impeachment proceedings:

Earlier this week, the conservative Daily Caller website asked the offices of each of the 53 Republican senators whether they opposed the impeachment and removal of President Donald Trump. Just seven of them said yes.

Which is, well, verrrrrrry interesting…

…Of the 46 Republican senators who didn’t expressly reject impeachment, almost half — 22 — simply declined to comment to the Caller. Which, in and of itself, is telling! Many of the others criticized House Democrats for their impeachment inquiry but failed to rule out the possibility of voting to remove him from office if it came to that.

► A new CNN/SSRS poll shows former Vice President Joe Biden with a solid lead among the candidates seeking the 2020 Democratic Presidential nomination. The poll shows Biden with 34% support from Democrats and Democratic-leaning voters, followed by Sen. Elizabeth Warren (19%) and Sen. Bernie Sanders (16%); no other Democratic candidate breaks double-digits. The CNN poll should probably be taken with a grain of salt, however, since it is significantly different from other recent national polls. 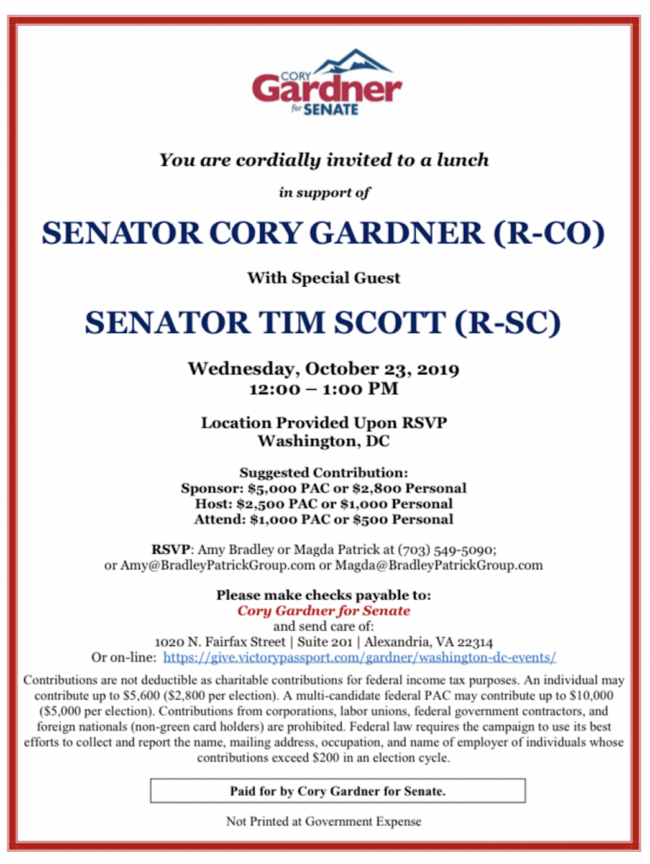 ► All together now: Proposition CC will not take away your personal tax refund!

► Supreme Court Justice Elena Kagan spoke at the University of Colorado on Tuesday and tried to make the case that the court is not as partisan as it might appear.

► State Rep. Daneya Esgar (D-Pueblo) announced plans to run for a fourth and final term in the legislature.

► Colorado’s Marijuana Enforcement Division appears poised to ban three vaping additives that are believed to be related to a nationwide outbreak of lung ailments.

► As John Aguilar reports for The Denver Post, there is much disagreement among transit leaders about how to deal with an RTD driver shortage:

Regional Transportation District leaders on Tuesday made it clear that before any reductions are made to bus and train service in metro Denver — a possible response to a worsening transit worker shortage — the agency will need to first meet with communities in the district to elicit their input on any potential route cuts.

“We have to reach out to the stakeholders — this is not just an RTD problem, this is a regional problem,” said Director Judy Lubow, who represents Longmont.

Her colleague, Director Angie Rivera-Malpiede, said the prospect of nixed routes in the 2,342-square-mile transit district centering on Denver is dire.

“In my opinion, RTD is in crisis,” she said Tuesday night.

Labor shortages for transit services have been a growing problem across the country in recent years.

► President Trump says that he is totally winning Syria.

► Former Rep. Tom Tancredo believes that there is never a wrong time to say a terrible thing.

► This is what Sen. Cory Gardner (R-Yuma) thinks passes for “leadership” on the issue of addressing gun violence in America:

Today I introduced a bill to create a 3-digit phone number for a suicide prevention and mental health crisis hotline.

This bipartisan idea would allow Americans to dial 3 digits for any crisis:

9️⃣1️⃣1️⃣ for an emergency, and
9️⃣8️⃣8️⃣ for a mental health emergency

► Don’t miss the latest episode of The Get More Smarter Podcast and find out if you can do better at “Duke or Donald” than our guest contestant.