No Surprise: Fighting Proposition CC By Lying To You 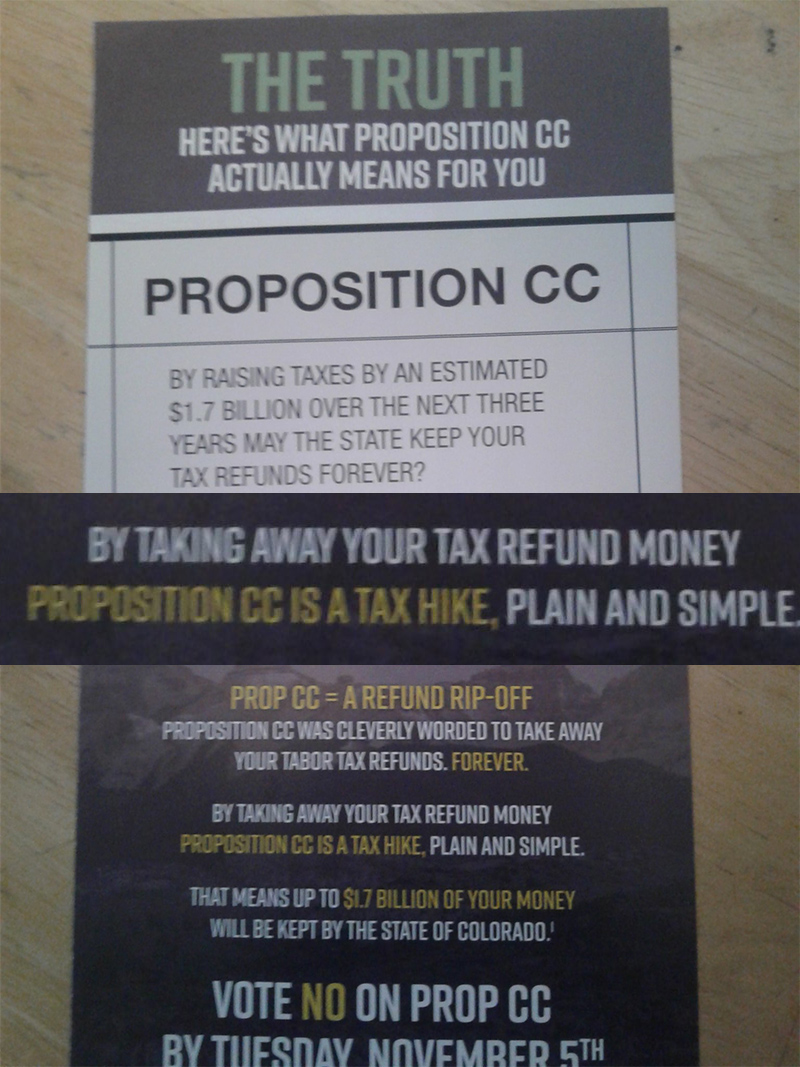 Here’s a mail piece that arrived over the weekend urging a “no” vote on Proposition CC, the statewide measure to allow the state to retain taxes collected in excess of the 1992 Taxpayer Bill of Rights’ (TABOR) arbitrary limit on revenue growth–a provision that has made it counterintuitively more difficult for the state to provide for basic needs even in economic boom times.

Proposition CC, as we believe most of our readers know, pertains specifically to excess revenue collected over TABOR’s revenue growth limit. We are not talking about the income tax refunds that many Coloradans receive every year, and rely on through tax credits and the annual lump sum for essential income. The last time revenue growth was high enough to trigger TABOR refunds was 2015, and the average “payout” ranged from $13 to $41. This distinction is crucial for voters to understand, since Colorado is the only state with a law like TABOR that mandates such refunds, and most people don’t know enough about TABOR to avoid conflating TABOR refunds with the vastly larger annual income tax refunds of withholding overpayments to the federal and state government.

It would also be illegal, and insane. But that doesn’t matter when you don’t have the facts.

In the end, we believe that this fundamentally misleading argument being successfully planted in the minds of low-information voters could result in large numbers of misguided “no” votes on Proposition CC. Factual or not, it is a very real threat, and it’s clear Proposition CC’s opponents intend to exploit this gap in voter knowledge to win. As we’ve observed countless times in Colorado politics, proving the old adage, “a lie travels halfway around the world while the truth is still getting its pants on.” Recent Colorado elections have been packed full of lies seeking to outrun the fact-checkers, from the racist “China Girl” attacks on Sen. Rachel Zenzinger’s to downright slanderous smears against Gov. Jared Polis on the campaign trail last year.

Those lies failed. But if Prop CC supporters don’t refute this lie just as vigorously, it’s going to hurt them.