Note To Aspiring Officeholders: DO NOT Plagiarize The Washington Post

Former Rep. Scott McInnis’s (R-Colo.) gubernatorial campaign is in a fight for its life as charges of plagiarism have led to questions of whether he can stay in the race.

Republicans in Colorado say he’s a dead man walking, and they are exploring the ins and outs of what they can do to get another nominee…

Sources in Colorado Republican circles say it’s likely a matter of when, not if, McInnis will exit the race.

“Almost without exception, they think he is done,” said one senior Colorado Republican granted anonymity to speak candidly. [Pols emphasis]

“He may be the last one to know it, but he’s dead in the water,” said another. “It’s likely he will resist heavily, but at some point he’s got to realize this is a fact of life.” 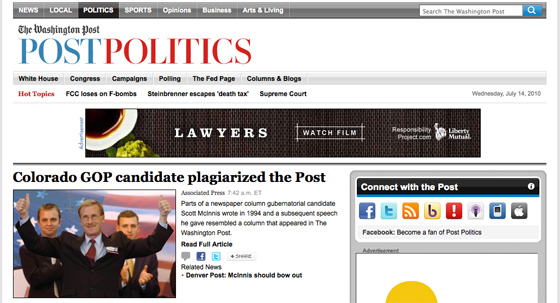 That sound you hear is McInnis’ card, from every Rolodex inside the Beltway, being shredded. Combine this with a major Denver newspaper calling on McInnis to drop out of the race, and we’d say that you can go ahead and pull out that fork now. Ladies and gentlemen, your Republican nominee for Governor, some guy named Dan Maes! 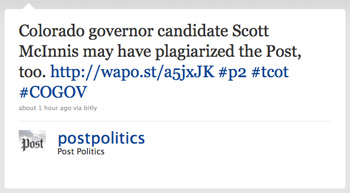 The folks minding the Twitters at the Washington Post took notice of new allegations of plagiarism–unrelated to the ‘researcher’ the campaign is blaming already-reported incidents on–by GOP gubernatorial candidate Scott McInnis, as reported today in our state’s newspaper of record:

Which points to their wire story. To briefly summarize, McInnis published an op-ed in the Rocky Mountain News in December of 1994 that directly lifted the words of a Washington Post opinion piece about a month and a half prior. The following January, McInnis gave a speech on the floor of Congress that again lifted this text without attribution. This new incident can’t be pinned on the ‘researcher’ McInnis is blaming the incidents of plagiarism from his “Musings on Water” articles for the Hasan Foundation–a shifting of blame that doesn’t help McInnis anyway, since the Hasans insist that the essays were always represented as McInnis’ sole work.

Not to mention that the Glenwood Springs paper caught up with the researcher in question, Rolly Fischer, who is apparently not interested in being Scott McInnis’ scapegoat, and doesn’t sound very ‘remorseful’–as McInnis has been representing him–while denying any responsibility for the plagiarism. We viewed his unwillingness to be scapegoated as the most damaging thing for McInnis that has happened since the story broke–up until these new incidents of plagiarism were revealed that have nothing to do with Rolly Fischer.

This story is moving very rapidly at this point. Every media outlet in the state, and now national press as well, is trying to get the next big scoop; with a particularly heated rivalry emerging between the Denver newspaper and local television stations over who will report the latest game-changing angle. There’s a consensus that these incidents of clear and deliberate plagiarism are being found much too easily, and many more are in all likelihood out there waiting to be found. It has a life of its own now, and the calls for McInnis to withdraw from the race will only continue to get louder as new information is uncovered.

The end will come when Scott McInnis chooses to end it.