So Much For That: Denise Burgess Out of Senate Race

UPDATE: The Colorado Sun is reporting that Burgess has some federal tax liens that somebody with her campaign probably should have figured out a long time ago:

The Sun found at least four federal tax liens under Burgess’ name dating back to 1998 and totaling nearly $165,000, whose company managed part of the construction of the Westin and transportation plaza at Denver International Airport. That’s in addition to several liens filed against her construction management business, including for failure to pay employee payroll taxes.

At least one of those liens remains outstanding, her campaign acknowledged to The Sun on Wednesday. The most recent Internal Revenue Service lien leveled against her was for $67,957 in unpaid personal individual income taxes from the 2014 tax year, records show.

Opposition research: It’s not just for other candidates.

We noted on Monday that the Democratic field for U.S. Senate was back up to double-digit numbers thanks to the belated candidacy of Denver businesswoman Denise Burgess.

Welp, that candidacy is has apparently already run its course. Burgess announced today that she was ending her Senate bid just days after it first began: 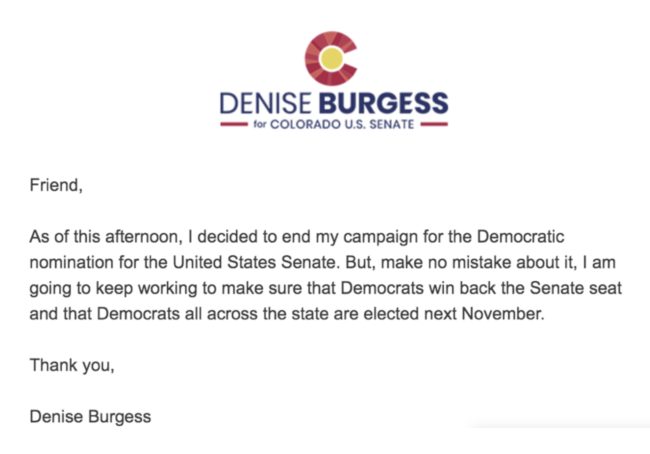 Last Spring, we heard a rumor that Burgess was being discussed as a potential U.S. Senate candidate by a particular progressive advocacy group; that rumor disappeared quickly, however, and we hadn’t heard anything more about Burgess until she abruptly announced her candidacy on Monday. As we discussed earlier this week, Burgess’s Senate candidacy made little sense given the already-crowded field and the presence of a well-known frontrunner like former Gov. John Hickenlooper.

We’ll update this post if we learn more information about why Burgess was in and out of the race so quickly.