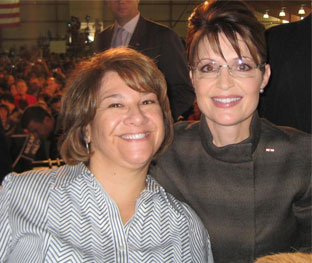 Some of you will remember 2008 SD-19 candidate Libby Szabo, who ran unsuccessfully against now-incumbent Sen. Evie Hudak of Arvada. It was an interesting race: Hudak, it can be gently said, doesn’t have the most commanding stage presence. Fortunately her opponent was Szabo, who, if you haven’t had the pleasure, has a voice even more nasal and grating than Craig Silverman.

Well, Libby Szabo is back this year, running against Sara Gagliardi in HD-27, and once again the focus of high GOP hopes.

Szabo was hurt in 2008 by a questionnaire filled out for Colorado Right to Life, where she indicated that she opposed all abortions–even in cases of rape. She strongly backed 2008’s “personhood” initiative and is expected to do so again this year. Her base of political support primarily revolves around Faith Bible Chapel in Arvada, one of the more influential evangelical megachurches in the northwest Denver area.

Everybody’s got freedom of religion, of course, and we’d say that religious belief should only become a political issue where someone applies religion to their politics. Libby’s husband Denes Szabo is an instructor at the Faith Bible Institute of Biblical Studies, and a selection of his lectures is available on the church’s website. Mr. Szabo’s specialty is “Israel and the End Times,” and on March 9th of this year, he had some interesting things to say about those “End Times”–and President Barack Obama. You, um, know where this isn’t going, don’t you? Audio excerpt, which you really have to hear to believe:

So, apparently some people have made T-shirts with a picture of Obama with a halo, and that’s blasphemous, and the Anti-Christ is going to scare people by promising health care reform, and people are going to “fall for it hook, line and sinker,” and…uh…

Of course, Obama’s popularity has suffered in the last year and a half, making him a popular ogre for lots of disaffected people–sure. We get that. Despite this, we still tend to think if Libby or Denes say too much about Obama’s eerie similarity with “the anti-Christ” on the campaign trail, Libby’s candidacy for the House–at least among the majority of sane voters in HD-27–will get martyred about five minutes later.