Get More Smarter on Thursday (September 5)

Click here to donate to the American Red Cross for relief efforts surrounding Hurricane Dorian’s destruction. Let’s Get More Smarter. If you think we missed something important, please include the link in the comments below (here’s a good example). If you are more of an audio/visual learner, check out The Get More Smarter Show or The Get More Smarter Podcast. And don’t forget to find us Facebook and Twitter.

► President Trump is spending a significant amount of time trying to convince Americans that he was correct in stating that Hurricane Dorian was a threat to the state of Alabama (it wasn’t.) Politico looks into the “mystery” of #Sharpiegate to determine who doctored the map below (like we all don’t know the answer to this one): 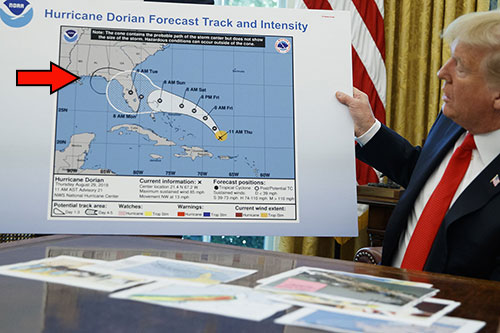 Trump holds a map of Hurricane Dorian’s projected path, which includes a Sharpie-drawn addition (we added the red arrow)

Trump was mercilessly mocked online and on late-night television for #Sharpiegate. Fox News commentator Juan Williams even unleashed on Trump, saying “We need accurate information at a time like this.”

Of course, Trump has no intention of letting this topic rest, doubling down on Thursday and spending an inordinate amount of time on Twitter defending his claims that Dorian was once a threat to Alabama. From CBS News:

Even though the National Weather Service and National Hurricane Center said there was no potential threat to Alabama, the president doubled down on his claim in several tweetsThursday morning.

“Alabama was going to be hit or grazed, and then Hurricane Dorian took a different path (up along the East Coast). The Fake News knows this very well. That’s why they’re the Fake News!” Mr. Trump tweeted. “What I said was accurate! All Fake News in order to demean!” he said in another tweet.

To back up his claim, he posted a map Wednesday of possible storm tracks that the South Florida Water Management District had put out on a week earlier, on August 28.

Go ahead and defend President Trump here. Really — we’d love to understand why anyone thinks this is a good use of time for the President of the United States. As Greg Sargent writes for the Washington Post, this is indicative of a much bigger problem where Trump and the White House take extreme measures to dispute inarguable factual information. CNN’s Chris Cillizza examines the larger concern with #Sharpiegate:

What’s remarkable — and telling — about the now days-long saga over Alabama and Hurricane Dorian isn’t that Trump didn’t tell the truth initially. Or even that he continued to double and triple down on the falsehood. Or that none of his senior aides, who presumably know the truth and how far Trump is from it here, are willing or able to do anything to modulate his behavior. (To be clear: All of these things are important and troubling. They’re just not new.)

It’s this: Trump is so obsessed with being right (or at least being perceived as being right by his supporters) that he blocks out any and all other responsibilities or duties as President to pursue that goal. [Pols emphasis]

► President Trump’s insistence on using military funds to build his big ‘ol border wall with Mexico comes at a significant cost to many other projects that are now on hold as a result. As the Denver Post explains:

The Department of Defense has delayed work on an $8 million construction project at Peterson Air Force Base as part of President Donald Trump’s plan to use military money to pay for a border wall, U.S. Sen. Michael Bennet’s office said Wednesday.

…The Colorado project in question is construction of a space control facility at Peterson AFB in the Colorado Springs area. According to a description on the military’s website, the $8 million was to “construct a space control facility utilizing conventional design and construction methods.” The facility was to have a secure area, known as a SCIF in military parlance, that held 88 people…

…If the space control facility is not built, the military wrote in its May 2017 proposal, there could be “operational and strategic mission impacts due to inadequate facilities.” Peterson AFB did not answer questions about the project Wednesday.

Colorado Sen. Cory Gardner (R-Yuma) had previously guaranteed that no military funding would be diverted for wall-building purposes. As the Colorado Springs Gazette reported in March:

Check out this graphic from MSNBC.com detailing the military cuts around the country: 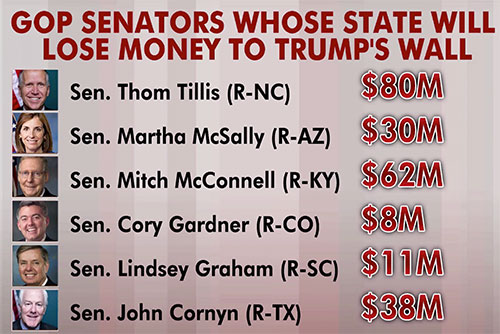 ► Tune your earbuds into the latest episode of The Get More Smarter Podcast, where hosts Jason Bane and Ian Silverii talk Mike Johnston’s exit from the U.S. Senate race, fake outrage over fake hamburgers, and the latest news from the race for CO-6.

► Anna Staver of the Denver Post reports that some conservatives in Colorado are STILL riled up about a sex education bill that doesn’t do what they think it does:

A handful of school districts across Colorado have a problem with the state’s new requirements for sex education.

It’s not an objection to the standards in House Bill 1032 about teaching consent, or LGBTQ relationships, or abortion as a possible pregnancy outcome — though some have religious objections to that part. Their opposition to the law is that those specific standards violate the part of Colorado’s constitution that gives local control over curriculum to the school districts.

“We’re tired of the state telling us — mandating — what we teach our kids,” said Mark Pfoff, a school board member at Lewis-Palmer School District 38 in Monument.

How dare you require us to provide accurate information to students!

► The Chair of the Denver Republican Party says she thinks the late Rev. Martin Luther King, Jr. would have wanted to have a friend with a sniper rifle. King’s youngest daughter, Bernice King, is not at all amused.

► A new poll shows that former Gov. John Hickenlooper leads the rest of field of candidates for U.S. Senate with support of 60% of respondents. No other candidate even breaks double digits. It’s not hard to understand why someone like former State Sen. Mike Johnston would exit the race now that Hickenlooper is running.

► As Brian Eason writes for the Colorado Sun, even conservative defenders of TABOR have to admit that it’s not working like they thought:

TABOR has indeed acted as a constraint on taxes, leading lawmakers to enact multiple tax cuts to stay within the state’s spending limits. But the constitutional provision’s cap on spending has not completely prevented government from growing, as many conservatives hoped. Nor has it allowed the state to maintain the same level of public services that it provided in 1992, as its backers promised.

There are a number of reasons the revenue cap hasn’t kept up with the growth in demand. Critics point to its faulty reliance on consumer inflation as a measure of state government costs, as well as budgetary cycles that force the government to absorb deep cuts during economic lows while preventing comparable spending surges during economic highs.

But one of the biggest reasons the revenue cap hasn’t worked as advertised is this: The state has simply taken on more responsibilities than it had 27 years ago, a review of government spending data since 1992 shows. And core public services such as K-12 schools, transportation and higher education have suffered as a result.

Proposition CC, which is on the ballot in November, seeks to remedy some of these problems. Colorado Attorney General Phil Weiser, meanwhile, is asking a court to continue to examine a legal challenge to TABOR.

► Wisconsin Republican Rep. Jim Sensenbrenner, the second-longest serving member of the House of Representatives, announced on Wednesday that he will not seek re-election in 2020. More than a dozen House Republicans have already announced that they will not seek another term in 2020 as they reconcile their political beliefs with the reality of a Republican President who is a complete disaster.

► As Dana Milbank writes for the Washington Post, Senate Majority Leader Mitch McConnell isn’t so keen on free speech if it means that people are allowed to call him names:

The Senate majority leader is distressed that people are calling him names. First there was “Moscow Mitch” (because he refuses to do anything significant to stop Russian interference in U.S. elections), and then there was “Massacre Mitch” and even “Murder Turtle” (because he refuses to take up gun-violence legislation despite massacre after massacre). At the risk of hurting the Kentucky Republican’s tender feelings still further, I suggest another moniker: Muzzle Mitch.

McConnell, who styles himself a champion of free speech, has lately not been such a fan of free speech directed against him. The psychological boo-boos done to his thin skin have stirred him to hypocrisy…

…McConnell’s view that the speech he dislikes is defamatory clashes with his professed First Amendment devotion. His money-is-speech argument has prevailed at the Supreme Court, causing the current flood of unlimited dark money in politics and the unparalleled vitriol it injected. He has, to his credit, defended flag burning, saying, “in this country we have a long tradition of respecting unpleasant speech.” He also has championed free speech on the Senate floor.

► The City of Denver is joining a challenge to the Trump administration’s rollback of Obama-era clean air standards.

► Governor Jared Polis announced the creation of The Office of Future Work.

► If you can figure out a way to get invited as a speaker for an event with the El Paso County Republican Party, you can make an obscene amount of money for your troubles.

► As the Huffington Post explains, helpful Internet users are demonstrating new ideas for how President Trump can use a Sharpie to rewrite history.

► Seriously…check out the latest episode of The Get More Smarter Podcast, where hosts Jason Bane and Ian Silverii talk Mike Johnston’s exit from the U.S. Senate race, fake outrage over fake hamburgers, and the latest news from the race for CO-6.