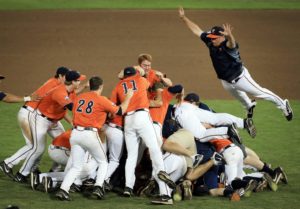 With this morning’s official entry by former Gov. John Hickenlooper into the Democratic U.S. Senate primary to challenge American’s Most Vulnerable Senator™ Cory Gardner, a full-court-press campaign by the National Republican Senatorial Committee (NRSC) hoping to persuade Hickenlooper to stay out of the race via insider surrogates and ulterior motive-laden pundit hot takes has failed. We have been certain of Hick’s entry into the race for some weeks now, of course, but this last-ditch effort from people with clear ties back to Gardner and Colorado Republicans was interesting to watch–primarily because of the fear on the part of Republicans it broadcast clearly between the lines.

Now that Hickenlooper is in the race, the NRSC has switched gears: to amplifying every dissenting voice against Hickenlooper within the Democratic party they can find. And with a large field of lesser-known Democrats indicating that at least for now their campaigns will continue, Republicans aren’t hurting for content to boost:

Here you can see Matt Whitlock of the NRSC retweeting the comms director of the Colorado Senate Democrats, and (surprise!) Republicans don’t make any distinction between “personal” Twitter accounts and one’s official position like Keith Barnish was clearly hoping. The realization that he had just become a tool of the NRSC appears to have shook up Mr. Barnish enough to issue this “clarification.”

All opinions are my own and a point of clarification – I believe it’s time for a new generation of leadership, but Hickenlooper would be a 100 percent better option than @SenCoryGardner. #cosen #copolitics https://t.co/WgOzwMqPIv

Herein lies a crucial lesson for Democrats to take to heart, no matter who you’re backing in the Democratic primary at this moment. Republicans have made it crystal clear in recent weeks that they consider Hickenlooper to be the most formidable opponent to Cory Gardner–a contention backed up by polling and reinforced by the punditocracy’s attempts to keep him out of the race. That means every Democrat with public visibility or even a decent social media following needs to be diligent about not letting their frustration become a Republican talking point against someone who may well be the eventual nominee. It’s true in every primary, but more so given the desperation of the GOP to land a blow on Hickenlooper any way they can.

This isn’t about “falling in line.” It’s about not being a tool of your opposition. If ranking Colorado Democrats consolidate their support behind Hickenlooper, which appears increasingly likely, the NRSC’s window to exploit such dissent is probably going to be short. When we look back in the fall of 2020 at this long campaign trail, let’s all be proud of our every word.