Get More Smarter on Friday (August 2)

Happy National Water Balloon Day. If you think we missed something important, please include the link in the comments below (here’s a good example). If you are more of an audio/visual learner, check out The Get More Smarter Show or The Get More Smarter Podcast. And don’t forget to find us Facebook and Twitter.

► UPDATE: Nevermind, then. Ratcliffe has withdrawn from consideration.

Here’s a shocker: President Trump’s pick to be the next director of national intelligence seems to have a problem with making things up about himself. From the Washington Post:

President Trump’s choice to lead the nation’s intelligence community often cites a massive roundup of immigrant workers at poultry plants in 2008 as a highlight of his career. Rep. John Ratcliffe claims that as a federal prosecutor in the Eastern District of Texas, he was the leader of the immigration crackdown, describing it as one of the largest cases of its kind.

“As a U.S. Attorney, I arrested over 300 illegal immigrants on a single day,” Rat­cliffe (R-Tex.) says on his congressional website.

Um, nope. Court documents show that only 45 people were charged by Ratcliffe’s office — and six of the cases were dismissed.

Ratcliffe’s background has come under scrutiny since Trump announced Sunday that he plans to nominate the lawmaker to be the next director of national intelligence, replacing Daniel Coats, a former longtime senator and diplomat who was often at odds with the president.

Ratcliffe has dialed back his earlier claims that he had won convictions in a high-profile terrorism case as a federal prosecutor. His planned nomination has drawn opposition from Senate Democrats and tepid support from key Republicans.

Some current and former intelligence officials have said Ratcliffe is the least-qualified person ever nominated to oversee the country’s intelligence agencies — previous directors have been former diplomats, senior intelligence officials and military leaders — and questioned whether he would use the position to serve Trump’s political interests. [Pols emphasis] The post was created after the Sept. 11, 2001, terrorist attacks to coordinate the 16 other agencies of the nation’s intelligence community.

As CBS News reports, Ratcliffe doesn’t appear to be all that interested in the subject he would be tasked with overseeing:

The House Intelligence Committee conducts the vast majority of its work behind closed doors and, often, beyond the walls of the Capitol. But a CBS News review of the eight open hearings the committee has held to date show that Ratcliffe engaged comparatively little during those sessions with the substance of intelligence topics in the panel’s purview.

While in open session, he did not ask any questions related to the work of the intelligence community — or unrelated to the Mueller investigation — in his six-month tenure on the panel.

Democrats are planning to put up a prolonged fight in an effort to prevent Ratcliffe’s nomination from being approved in the Senate.

► Opponents of recently-passed legislation to add Colorado to a list of states that would choose the President via a national popular vote have submitted signatures to get their measure on the ballot in 2020. Whether this actually makes political sense is another topic altogether.

► A bunch of new laws go into effect in Colorado today, including a measure to provide cost transparency by hospitals and a cap on co-pay costs for life-saving insulin medication.

► According to an analysis by the Washington Post, a majority of House Democrats now support moving forward with impeachment hearings against President Trump. Aurora Democratic Rep. Jason Crow recently announced his support for impeachment proceedings.

► President Trump held a campaign rally in Cincinnati, Ohio on Thursday night. It was about as odd as you might expect, as Chris Cillizza notes for CNN. This Trump line is particularly strange: “Ohio is the most successful it’s ever been in the history of our country.”

“He is sacrificing his life to save America from a new world order,” said Tina Callahan of Springfield, Ohio.

What if he is not reelected?

► British Prime Minister Boris Johnson is already presiding over a tattered administration. It’s only been 10 days since he was elevated to the top job in the United Kingdom.

► President Trump verbally attacks a sitting Member of Congress, and a few days later there is a break-in at that Congressman’s home in Baltimore. From CNN:

President Donald Trump appeared to sarcastically call out a break-in at Rep. Elijah Cummings’ Baltimore home after a week of attacking the prominent African American lawmaker over the conditions of his Baltimore district – even comparing the city’s murder rate to third world countries.

“Really bad news! The Baltimore house of Elijah Cummings was robbed. Too bad!” the President tweeted on Friday.

► And then there were…none. Congressman Will Hurd of Texas, the only black Republican in the House of Representatives, announced that he will not seek re-election in 2020. Hurd’s retirement from Congress at the age of 41 is a blow to Republicans nationally and another clear example of the “Trump or else” stance of the GOP. As the Washington Post writes, “Hurd has been trying to sound the alarm” about the difficulty in recruiting diverse candidates for office in the Republican Party, “but he’s found GOP leaders unreceptive and afraid of crossing Trump.”

► Bruce Finley of the Denver Post reports on a Congressional field hearing on Climate Change that took place in Boulder on Thursday:

The U.S. Congress Climate Crisis Committee came to Colorado this week seeking guidance for a new national push to reduce the heat-trapping air pollution that worsens global warming — boosting the state’s position as a center for innovative action.

Members of this select committee and staffers explored energy research labs for two days. They quizzed scientists at work on accelerating a shift off fossil fuels to lower-cost wind and solar electricity.

And on Thursday the lawmakers held their first formal field hearing in a jam-packed courtroom at the University of Colorado law school, repeatedly asking state and city leaders how best the federal government could weigh in…

…This congressional visit, arranged by first-term U.S. Rep. Joe Neguse, a committee member and Lafayette Democrat, was designed largely to help focus federal funding for green energy research and development. Colorado-based facilities include the National Renewable Energy Lab, North American Oceanic and Atmospheric Administration labs, the National Center for Atmospheric Research and the University of Colorado in Boulder. Research teams are creating cybersecurity systems to protect power grids, super-efficient wind turbines, low-cost solar panels that can be “painted” onto walls and printed out like newspaper for installation on massive glassy skyscrapers.

► A portrait of President Trump at last hangs in the State Capitol. Michael Roberts of Westword details the long, sad saga that begat the Trump portrait. The Associated Press, meanwhile, pays homage to one of the better recent political pranks in Colorado: 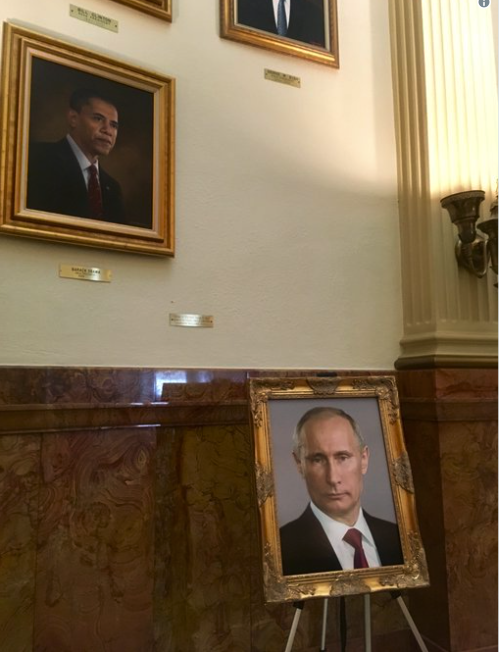 This portrait appeared at the State Capitol one year ago.

► This supporter of Donald Trump jumped out of a truck in Cincinnati to throw wild punches at a Trump protestor…right in front of a half-dozen police officers. It didn’t go well.

► Three board members resigned from the National Rifle Association (NRA) on Thursday as the organization continues to deal with the fallout from a number of high-profile scandals.

► We’d be asking for our money back, too.