Erasing The Line Between Journalist And Partisan Hack

Last week, an un-bylined post at the liberal ColoradoPols blog pointed to an alleged invitation for a summer BBQ that doubled as a fundraiser for Republican candidates. ColoradoPolitics senior reporter Joey Bunch was listed on the invitation as as master of ceremonies for the event. Whoa if true, right? The unnamed author of the post was not charitable about the matter. Something like that would be problematic indeed.

I assume plenty of politics watchers and journalists had seen the post or mention of it, but Bunch hadn’t said anything publicly about this by Sunday when I asked him about it. He speaks at events often, he says, and he’d agreed to emcee what he thought was a barbecue, but he didn’t know who was attending or specific details about the event. He says he backed out when he learned what it was. “As soon as I found out it was a fundraiser it was a no brainer,” he told me, adding, “ColoradoPols could have found that out if they’d called me and asked me.” (Side note: He says he actually learned it was a fundraiser from the blog post.) [Pols emphasis]

A Democratic party operative told me the thought of a political reporter serving as the emcee of a Republican fundraiser might give the operative pause when considering whether to engage with that reporter on future stories. Understandable. “Avoid conflicts of interest, real or perceived,” and all. The Democrat put it in the context of ColoradoPolitics being a sponsor of this year’s Western Conservative Summit, as the outlet was in 2018, and that the outlet is owned by a wealthy conservative who gets involved in politics…

We’re trying to figure this response out. We could have called Bunch and asked him about this event before we wrote about it…but he only found out it was an inappropriate event to emcee after we wrote about it? Doesn’t that mean if we hadn’t written anything, he wouldn’t have cancelled?

And while we’re at it, do the Foothills Republicans host any “barbeques” that are not fundraisers?

We’re glad to see that Bunch cancelled his appearance. If Bunch really didn’t know what he had signed up for, we’re also happy to have helped inform him. 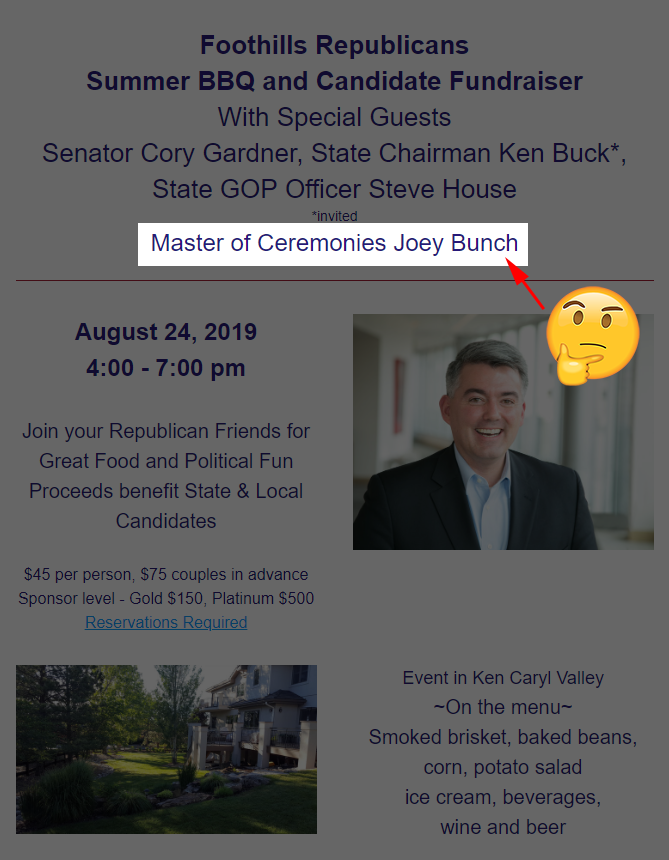 But there is something significantly wrong with the so-called “Master of Ceremonies” at this fundraiser Colorado Springs Gazette lead political reporter Joey Bunch. Reporters do often appear at partisan political functions as guests, to provide analysis and answer questions about political issues, but Joey Bunch serving as “master of ceremonies” implies a much more direct role in helping Republicans raise money than a mere guest speaker.

Joey Bunch has a history of ethical troubles as a reporter for the Phil Anschutz-owned Gazette, including a particularly troubling incident in 2018 which led to the firing of a GOP Colorado Senate aide who pitched Bunch unsourced smears about alleged “personal indiscretions” on the part of a victim of sexual harassment by a Republican lawmaker–and Bunch reprinted in an almost inconceivable breach of both journalistic ethics and just plain common decency.

Anschutz, one of the biggest Republican donors in the state, has attempted to position the Gazette and its political site formerly known as the Colorado Statesman to fill a perceived vacuum in political news, recently staffing up to cover Denver local politics in addition to happenings at the state capitol. Anchutz’s record with such nakedly partisan outlets as the Washington Examiner and the now-shuttered Weekly Standard have always given local Democrats plenty of reason to be suspicious of Clarity Media’s motives.

So maybe this just means Anschutz is dropping any pretense of operating an unbiased news source? That’s fine if so, but so should everybody else.