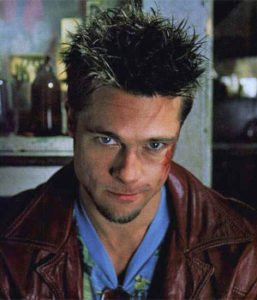 Our friend Jason Salzman has done a great job over the years holding politicians accountable for spreading fake news stories to their followers on social media–a practice that has become intensely controversial in the era of “post-truth” Donald Trump politics.

Ramey Johnson, a candidate for Lakewood mayor and current city councilwoman, is facing some criticism for sharing an article about climate change from a blog authored by someone posing as a fictional character from the movie “Fight Club.”

The article, from the blog Zero Hedge, was authored by someone posing as Tyler Durden, Brad Pitt’s character in the movie. It claims that a “bombshell” scientific study from Finland shows evidence that climate change is not necessarily man-made.

The study referenced was published on a website called arXiv, where scientists post unpublished manuscripts. The fact-checking website Climate Feedback rated the study as “incorrect”, pointing the Finland study was never published in a peer-reviewed journal.

Johnson, a Republican who has run for office relentlessly and generally not successfully in steadily bluing suburban Jefferson County for most of the 21st Century so far, has come under fire before for questioning the overwhelming scientific consensus that human caused climate change is real. She claims in this latest story that she doesn’t necessarily agree that climate change is a hoax, but:

Johnson said years ago she tried to convene a study session of the city council to look at all perspectives on climate change and “got crucified”. [Pols emphasis]

“The reality is we should be looking at everything, Steve, and we can make up our own mind on whether its accurate or not,” Johnson told Next reporter Steve Staeger.

To be clear, and in the era of Trumpian fake news it’s necessary to be restate again and again, critical thinking is not about “looking at everything.” We have peer review, and credibility standards for information sources, for good reasons. If this is not obvious to you, do the world a favor and don’t share anything on social media. You’re just making it worse.

Johnson’s most recent act of “sustainability” was her support for the recently-passed and hotly controversial housing cap in the city of Lakewood, which saw bipartisan opposition and is now forecast to severely hamper economic growth in one of the Denver metro area’s anchor suburbs while worsening the state’s already historic shortage of affordable housing. If there was anybody still imagining that such draconian remedies are the result of a scientific approach to Lakewood’s problems…here’s solid evidence to the contrary.