The western Denver suburb of Lakewood is playing host to a number of tight city council races, with the Ward One race between incumbent longtime Republican political fixture Ramey Johnson and challenger Kyra DeGruy attracting significant attention. Johnson is a former GOP state representative who narrowly lost the mayoral election to Adam Paul in 2015, and has a long, checkered history in Jefferson County politics.

Yesterday morning, Johnson hosted a regularly-scheduled monthly ward meeting, which are supposed to be nonpartisan town hall-type sessions with residents. Instead, by all accounts Johnson launched into a full-throated pitch for her own re-election.

And then things got a little, well…worse: 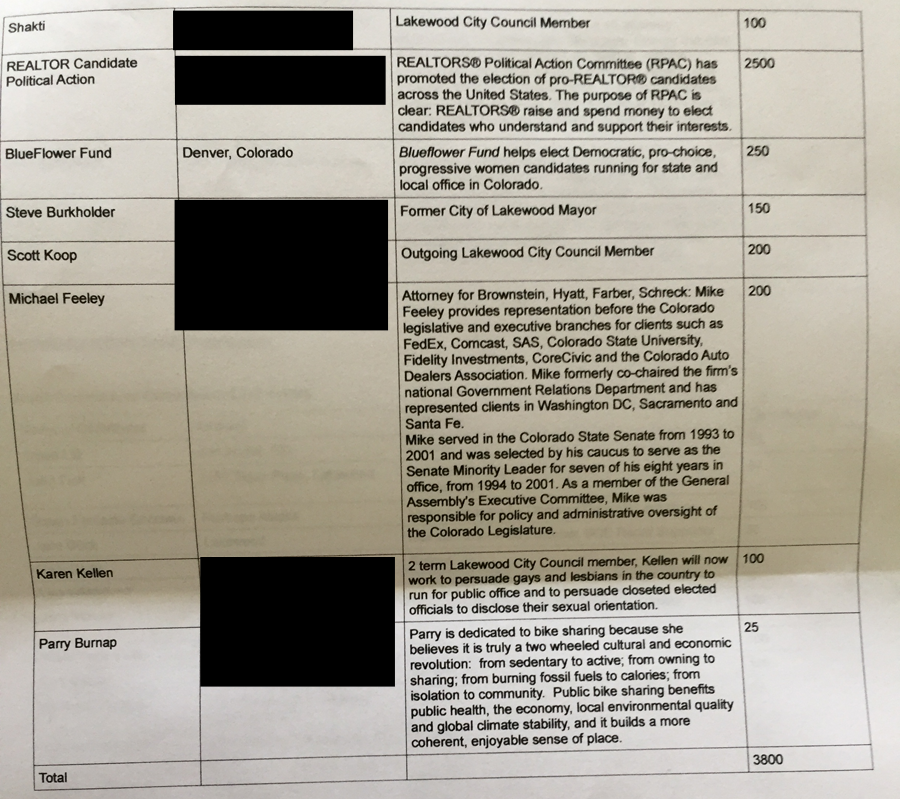 This is from a handout that Ramey Johnson distributed to attendees at this city-sponsored event “describing” various donors to Kyra DeGruy’s city council campaign. The descriptions provided by Johnson of these donors appear to be lifted from various sources, but are obviously editorial in nature. And, you know, not exactly flattering.

In the case of Johnson’s description of former Lakewood City Councillor Karen Kellen:

A little searching reveals that this context-free blurb was taken without attribution from a 2011 Denver Post story by reporter Monte Whaley–ironically enough titled “Colorado gay officials seeing more-tolerant attitudes.” The story wasn’t about Kellen’s work after leaving the Lakewood city council, but from right after Kellen’s re-election to a second term, when Kellen went on to help represent LGBT local officials at the National League of Cities:

Over the weekend, Kellen was elected as an at-large member to the board of directors of the Gay, Lesbian, Bisexual and Transgender Local Officials, a constituency group within the National League of Cities.

To summarize, Lakewood City Councillor Ramey Johnson lifted a six-year-old blurb about former Councillor Karen Kellen, and used it out of context in campaign literature improperly distributed at a city-sponsored event–with the obvious purpose of smearing Johnson’s opponent in the Ward One council race, Kyra DeGruy, by implicitly casting DeGruy’s donors as out of the mainstream.

Folks, this is beneath everybody involved. Lakewood is not some kind of culture-war backwater where cheap whisper campaigns should be politically rewarded. It’s a throwback to the ugly politics of the early 2000s–not coincidentally when Johnson was at the peak of her own political career–when this kind of thing would fly in Jefferson County politics.