Please let us know if we missed a comment from one of these folks.

President Trump went full racist over the weekend as part of a Twitter tirade against four Democratic congresswomen, and on Monday he doubled-down on those comments. As the Associated Press reports:

Unbowed by searing criticism, President Donald Trump on Monday emphatically defended his tweet calling on four Democratic congresswomen of color to go back to their “broken and crime infested” countries. Condemnation of his comments “doesn’t concern me because many people agree with me,” he declared.

Trump responded to questions at the White House after his Sunday tweet assailing the lawmakers, all of whom are U.S. citizens and three of whom were born here. He has been roundly criticized by Democrats who labeled his remarks racist and divisive. A smattering of Republicans also have objected, though most leading Republicans have been silent.

We have no doubt that the office of Sen. Cory Gardner (R-Yuma) has been busy not returning reporter calls today, but plenty of Republicans have commented on Trump’s remarks. While world leaders have roundly condemned Trump’s attacks, most Republicans who are speaking out are…not. As Aaron Blake writes for the Washington Post:

After spending much of the past 24 hours silently pretending that President Trump didn’t say what he just said, GOP reactions to Trump telling nonwhite congresswomen to return to the countries they came from are starting to roll in.

And it’s clear they have no good answers…

…Rep. Andy Harris (R-Md.) also tried to pretend that Trump hadn’t said what he said. Harris said that Trump’s tweets were “clearly not racist” and that “he could have meant go back to the district they came from — to the neighborhood they came from.” Trump’s tweet clearly references the “countries” these members came from before telling them to “go back.” There is no ambiguity on that count.

The first White House aide to weigh in at length was Marc Short, who serves as Vice President Pence’s chief of staff. He — rather remarkably — suggested Monday that Trump can’t be racist because he appointed a Chinese American transportation secretary, Elaine Chao. And that’s not even oversimplifying Short’s response.

That’s right — the Chief of Staff for Vice President Marc Short says President Trump can’t possibly be racist because Elaine Chao serves as his Transportation Secretary. As Colorado Pols readers understand, you can’t be racist if you went to a wedding in China, and this fits along those lines.

And then there’s South Carolina Republican Sen. Lindsey Graham, who barfed out this response on “Fox and Friends”:

“We all know that AOC and this crowd are a bunch of communists. They hate Israel. They hate our own country. They’re calling the guards along our border — Border Patrol agents — concentration camp guards. They accuse people who support Israel of doing it for the Benjamins. They’re anti-Semitic. They’re anti-America.” 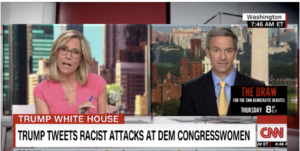 This morning, Alisyn Camerota of CNN repeatedly asked Ken Cuccinelli, Acting Director of U.S. Citizenship and Immigration Services, to comment on Trump’s tirade. Cuccinelli basically just shrugged when Camerota asked if Trump’s comments were racist, repeatedly insisting that he hadn’t been on Twitter in the last 24 hours as some sort of defense in his favor:

CAMEROTA: So how do you explain it?

CUCCINELLI: I don’t. You’re going to have to ask the President about that.

It wasn’t until later in the day that a few prominent Republicans started actually speaking out against Trump’s comments, as Politico reports:

“Instead of sharing how the Democratic Party’s far-left, pro-socialist policies… are wrong for the future of our nation, the President interjected with unacceptable personal attacks and racially offensive language,” said Sen. Tim Scott (R-S.C.), the only black Republican senator. “No matter our political disagreements, aiming for the lowest common denominator will only divide our nation further.”…

…Senator Susan Collins (R-Maine), a moderate up for re-election, said she disagrees “strongly” with House progressives on policy as well as their “anti-Semitic rhetoric” but urged Trump to take down his “way over the line” tweet.

“President Trump was wrong to suggest that four left-wing congresswomen should go back to where they came from. Three of the four were born in America and the citizenship of all four is as valid as mine,” said Sen. Pat Toomey (R-Pa.), emphasizing that he disagreed with the Democrats on “virtually every policy issue.” But he said those arguments should be defeated “on the merits, not on the basis of their ancestry.”

We’ll update this post if we hear any response from prominent Colorado Republicans.