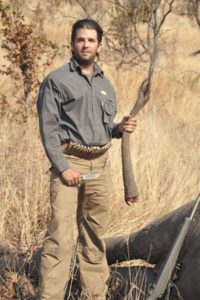 Donald Trump, Jr., holding the severed tail of an elephant he has just killed.

In a press release, Chairman of the Western Conservative Summit Jeff Hunt said Donald Trump Jr. is one of the boldest conservative voice[s] in the United States.

“He is a warrior for limited government, free markets, personal freedom, and the Constitution,” Hunt said. “We are elated he will be speaking at the Western Conservative Summit.”

Trump serves as executive vice president of the Trump Organization.

Donald Trump Jr. is certainly the biggest name so far announced for this year’s WCS, which was up until the latest additions including Sen. Cory Gardner was looking like the least luminary roster in some years. Gardner was apparently uncertain enough about appearing, hedging as late as a week ago, that Jeff Hunt of the Centennial Institute went so far as to publicly express his disappointment. Gardner’s perilously weak favorability among base Republicans, one of his key deficiencies going into next year’s election, probably always obligated him to appear–even though appearing at WCS could easily be a liability for Gardner with swing voters.

Considering Don Jr.’s reputation for being able to offend just about anybody including fellow conservatives in his free-wheeling defense of his father’s crazy train presidency, Gardner’s apprehension may prove well-founded before the weekend is out. There are any number of issues on which Trump and Gardner could come into conflict from Russia to building a wall on the Mexican border–conflicts Gardner does not want to get into, especially in the presence of base Colorado conservatives.

For all of these reasons, it would be a mistake to think that this event is friendly territory for Gardner. It’s a high-stakes tap dance, with major risks if Gardner commits a gaffe or elicits a negative response from the conservative audience. On the other hand, too much conservative red meat is no less a liability to Gardner in this left-trending swing state.

Will Gardner end up wishing he hadn’t gone at all? Stay tuned.