CNN reports from the G-20 summit in Osaka, Japan, where President Donald Trump just met with Russian President Vladimir Putin both privately and in public–and finally, to Sen. Cory Gardner of Colorado’s profound relief, strongly warned the Russian president to not meddle again in American elections–the way every investigation including the recently-concluded Robert Mueller inquiry has determined without question they did in 2016…

As you probably know by now, that’s not what happened. CNN in fact reports:

President Donald Trump issued a breezy warning to his Russian counterpart Friday against meddling in US elections, laughing and smiling as he told his counterpart not to interfere.

“Don’t meddle in the election, please,” Trump said, smirking and wagging his finger at Putin. He only raised the matter after being questioned by reporters whether he would issue a warning…

When he made his playful admonishment against election interference, Putin sat beside him laughing. Trump’s aides, including Secretary of State Mike Pompeo, also smiled. [Pols emphasis]

According to an AP poll released June 19, 63% of Americans have “major concerns” about the possibility of foreign interference in the next election. The same poll says that 44% of Americans don’t think the Mueller report exonerates Trump on coordinating with Russia, and another 31% aren’t sure. That Trump would be this cavalier with the Russian President about an issue so many Americans are legitimately concerned about is politically unfathomable–or at least would have been before Donald Trump. 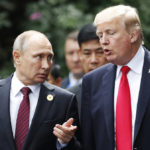 For Sen. Cory Gardner, this should be a political crossroads. Although Gardner has steadfastly refused to close the logical loop from Russian interference in the election to its goal, which was the election of Donald Trump, Gardner has tried to compensate with bellicose rhetoric about the threat posed by Russia in the vaguest possible terms–even as Gardner has drawn closer to Trump politically ahead of the 2020 elections. In April, Gardner introduced with much fanfare legislation that to “determine” is Russia should be on the list of state sponsors of terrorism–legislation we have to assume now Trump will never sign. And here’s what Gardner said about the Mueller report:

The report also confirms what we already know, Russia interfered in our election. I will keep up the pressure on the Putin regime and pursue additional sanctions – they cannot go unpunished.”

Senator Gardner has been an outspoken critic of Russia and President Putin and has been a leader in Congress on punishing Russia for their efforts to interfere in the 2016 presidential election and other illegal activities around the world.

With Trump’s latest humiliating mockery of what Gardner claims he believes took place in 2016, and a strong majority of Americans are worried is about to happen again, the cognitive dissonance that has allowed Gardner to condemn Russian interference on behalf of Trump in 2016 while endorsing Trump’s re-election in 2020 is coming to a head. Gardner is extremely adept at evasion of the media, especially when contradictions like this one are dominating the news cycle.

But this is too much. Trump and Putin are laughing. At Cory Gardner.