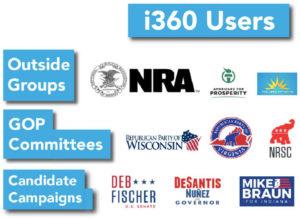 A dispute has emerged among Colorado Republicans about how much to rely on a giant database of voter information developed over many years with billions of dollars by the Koch brothers, the GOP’s mega donors.

The Koch database, called i360, is heralded by many Republicans as a beautiful tool to target voters across the country, including Colorado, using information gleaned from consumer spending (from credit agencies and vendors), social media, canvassing by Americans for Prosperity and others here in Colorado, and other places where big data sources.

“They know if you enjoy fishing — and if you do, whether you prefer salt or fresh water. They know if you have bladder control difficulty, get migraines or have osteoporosis. They know which advertising mediums (radio, TV, internet, email) are the most effective,” according to Salon.

But for former State Sen. Tim Neville (R-Littleton), the promise of i360 doesn’t match the reality, which led Neville, in part to reject pressure from the Colorado Republican Party (and its consultants) last year to use the party’s voter data to target voters in his (mostly) Jefferson County district, according to sources.

They say the state party’s data, which included i360 information purchased on multiple occasions beginning back in 2012 and augmented with other data, was really bad, causing the campaign to waste scarce time and money by regularly sending canvassers to the doors of hostile voters.

In the end, among the three highest priority state senate races in Colorado last year, Neville and Sanchez did only slightly worse than Christine Jensen, who used i360 from the state GOP in her state senate race. Neville lost by 14 points, Sanchez by 16, and Jensen by 12, handing control of state government to the Democrats.

The performance of Neville and Sanchez is eye-popping given the disproportionate resources that flooded the Jensen campaign. Neville himself raised the most money of the three candidates,

But conservative independent groups lavished money on Jensen, dropping about $3.2 million on her campaign versus $1.5 million for Neville and 1.2 million for Sanchez, according to TRACER campaign records, some media buys, and some other information. The GOP failed candidate over in Adams County, Beth Martinez Humenik, got about $3.8 million. These aren’t exact figures, but they give you an idea of the spending by GOP-allied groups.

They slammed alleged cut-and-paste mailers with glam photos making Democratic state senate candidates Brittany Pettersen, Tammy Story, and Faith Winter look like movie stars. Not only were the mailers awful, they say, but multiple iterations of the ads were sent to dedicated Republicans who hadn’t missed an election in decades.

They point to a  power point presentation in which Ryan Call, of the Colorado Republican Party’s independent campaign group, bragged about twice sending “slate-piece mailers to every single Republican in the state.”

Colorado Republicans had plenty of money, they say, pointing to reports on campaign spending, but they wasted their resources on cozy consultants, who sell voter data and don’t share it, too much direct mail, and excessive overhead.

In response to the criticism, which is still rampant on Republican social-media platforms and conservative talk radio shows, a defense of i360 and its use in the Colorado Republican Party’s and GOP groups’ voter-targeting software, was presented in a document, authored, according to a source, by former Republican lawmaker Matt Knoedler, who’s now a senior policy adviser at Squire Patton Boggs in Denver.

In his memo, Knoedler, who did not return multiple calls for confirmation and comment, offered a detailed and spirited defense of i360, responding to the critics by emphasizing that i360,along with the other data used, provided “solid data.”

“I’ll bet no-one else in the country adds that much data to the pool,” wrote Knoedler.

“This data/canvassing operation helped the GOP win the State Senate in 2014 and held it in 2016 despite Clinton and Bennet winning statewide,” he concluded.  “In my opinion, it would be a shame to replace the canvassing data from a smaller, non-networked vendor, especially one that does have unique, legislative-specific data on voters in these key districts.”

Acknowledging the dispute within the GOP, Knoedler wrote: “In 2018, the State House GOP’s new leadership team chose to use a different data source and to not share operational costs with the Senate.  I assume the House 527 did some canvassing, but don’t have access to those metrics.”

“It’s worthwhile to debate how we use the data, and how we could improve upon it,” states the memo by Knoedler.

The resolution of this debate is urgent, in part because Republicans are drawing on their voter data as they gear up for recall elections

In fact, some Republicans, like state house Republican leader Patrick Neville, make the argument that part of the value of the recall elections is to force Republicans to upgrade their voter-targeting data.

“We definitely need some help with the ground game,” Patrick Neville said on KNUS Chuck and Julie May 6. “The biggest thing we have to do is start now and start early. That’s why I think the recalls are appropriate too, because they give us the ability to start gathering that data for some of those competitive seats early and often like Democrats do.”

Neville thinks the data harvested during the 2013 campaign to recall State Sen. Evie Hudak, who resigned in 2013 as the recall appeared be successful, led to the victory of Republican Laura Woods in the district in 2014.

“What we did is, we took all that data and all that information we gathered from those voters in that district [during the attempt to recall Hudak], and we used it to win in the next election cycle,” said Neville on air. Patrick’s brother Joe Neville, who ran the GOP state house effort last year, also ran the Hudak recall.

“The problem was, the election cycle after that, we went home and we didn’t keep working the district. We have to keep it up on a year-round basis.”

That’s what Republicans are doing now. At a “recall training” seminar in Buena Vista April 11, Ben Engen from Constellation Political explains how the voter data is collected, using the “walk app” provided by the Colorado Republican Party.

“It’s an application for your phone,” said Engen in the video of the training. “They will load a list of potential voters on there. You can open it on your phone, and it will say, ‘Go to this house. There’s a person here. This is their voter file information.’ Ask them if they want to sign. It’s a way for you to look up that voter registration information.”

But the question is, will the list of potential voters given to Republican activists turn out to be Democrats hopping mad at Trump? Have the deep-pocketed Koch brothers—or the Republican Party–figured out a way to fix its voter information? Was it broken in the first place? Or, as some Republicans are now asking, is it the Colorado Republican Party that’s broken, not its big database?

Several people asked for my thoughts on conservative canvassing operations in 2018, so I asked around and got the following numbers:

“Attempts”: Door was knocked, literature was left behind.

Complete %: Percentage of targeted voters who completed a survey.

There are several important points to understand this chart, and also what is missing from it:

1) In 2018, the State House GOP’s new leadership team chose to use a different data source and to not share operational costs with the Senate.  I assume the House 527 did some canvassing, but don’t have access to those metrics.

2) Shared Data Pool: The chart above does not include canvassing counts for other campaigns that used i360, which is the Koch-owned backend data company used by most right-leaning groups in Colorado. When one i360 client inputs new data on a voter, all other clients benefit. In addition to sourcing the groups in the chart, i360 also sourced data to Americans for Prosperity, who did a great deal of canvassing in Senate districts, as well as to some well-funded oil and gas campaign groups. I would not be surprised if these groups combined to match the numbers below, effectively doubling the data intake.  The Colorado GOP also subscribed to i360 from 2012-2017 (I don’t think they did it last year), which means all GOP volunteer calls and door-knocks added to the data pool.  Beyond i360, the Senate/BCN team blended more data from L2 (a major commercial data source), GOP Data Trust (which CO GOP uses), and directly from the CO Secretary of State’s office. I’ll bet no-one else in the country adds that much data to the pool. I’ve heard there is much more in the special sauce that helps perform advocacy methods (digital, etc.), but i’m staying focused on canvassing here.

3) Who to knock?  Each canvassing operation may have a different goal, which means they may target different households at different times of the year.  The numbers below, I assume, were largely focused on voters that are identified as possible (but not definite) conservative candidate supporters, including those who may need more persuasion to change their mind, and those who made up their mind but were infrequent voters.  In an average State Senate District, there would probably be less than 30,000 identified targets over roughly 80 precincts- it looks like they covered all of the territory at least once in 2018 for the State Senate, and got about 11% of targeted households to complete a survey.  Because the pro-Stapelton 527 also used the data, their canvassing efforts complemented and added to data gathered by the Senate 527 whenever the two overlapped in a targeted area.

The data team evaluated precinct priorities by political score, but also on “walkability”, a custom formula that included checking crime rates, elevation gain, and percentage of apartments vs. houses, which sped up and improved results.  They also strictly audited individual canvassers’ performance by methods we should keep confidential, but they were wickedly effective.

4) What happens to new data?  First, keep in mind that the data is cumulative- so the 2014 and 2016 canvassing inputs help to inform targeting the same voter thereafter.  When a survey is completed, i360 periodically uses this new data to update algorithms that give the voter a score from 0.0 to 0.99.  New data is ranked higher than old data, but these swing voters in swing districts have well over 1,000 data points on them in the i360 file that informs the algorithm.  BUT THAT’S NOT ALL:  i360 and local data and polling wizards take the algorithm and identify voters who are otherwise similar to the person that was interviewed, and then assign a similar score to voters fitting that similar profile.  If Jane Doe fills out a survey, and Sue Smith around the corner is the same age, party affiliation, income, same voting history, etc… i360 will probably adapt Sue’s score toward’s Jane’s. Scaling that model statewide: by personally interviewing 16% of targeted voters at their doorstep, we learn a good deal about the other 84%.

5) This is solid data: This data/canvassing operation helped the GOP win the State Senate in 2014 and held it in 2016 despite Clinton and Bennet winning statewide— In my opinion, it would be a shame to replace the canvassing data from a smaller, non-networked vendor, especially one that does have unique, legislative-specific data on voters in these key districts.

It’s worthwhile to debate how we use the data, and how we could improve upon it… but the ideas I’ve heard recently did not include this background context.