Get it Done, Democrats 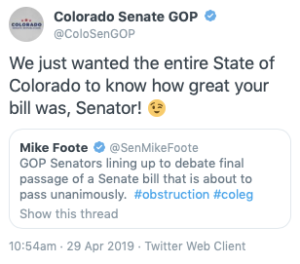 “If you want something done, ask a busy person.”

The originator of this saying might be Benjamin Franklin. It might also be Lucille Ball. More likely, it is one of those proverbs that have been repeated in one form or another for centuries. The progenitor of the wording is less important than the wisdom of the meaning; people who do a lot of stuff tend to get a lot of stuff done.

The 2019 Colorado legislative session must come to a close by midnight on Friday, but before Sine Die, there is still plenty of work to do. As Nic Garcia writes for the Denver Post:

Colorado’s General Assembly is barreling toward the end of its work this week with a number of priorities for Democrats, who regained control of the Senate in the 2018 election, still outstanding.

After a rare Saturday session, there were still about 200 bills making their way through the legislative process. While it’s not unusual for work to pile up at the end of the session, statehouse Republicans also have done their best to slow debate…

…So much work has backed up that both the state House of Representatives and Senate met Saturday, the first time either chamber has worked a weekend during a regular session since 1990.

Obviously, there is not enough time to debate and vote on 200-some pieces of legislation before the mandated end of the 2019 session on Friday, which means Democrats in control of the House and Senate must prioritize how to spend their final few days under the Gold Dome.

“We’re letting the majority know there are bills that we’re just going to take every possible minute to debate against, and there are others where we can have our say and let go.”

Some Republicans continue to argue that so many outstanding pieces of legislation is a bad thing, as though Coloradans would be better served if their elected officials just farted around for the last week of the legislative session. This is precisely the thinking that cost Republicans their one-seat majority in the State Senate in 2018. It is also factually incorrect; fewer bills have been introduced overall in 2019 than in the 4 prior legislative sessions.

Republican leadership has not grasped the concept that voters would like their elected officials to do elected official things, so they continue their campaign to disrupt and delay. The GOP’s go-to move is to require legislation to be read out-loud in order to waste time, but it’s not just policy concerns that drive their tantrums; over the weekend Republicans like Sen. Owen Hill meandered into shaking their fists over such meaningless crap as whether or not men should still have to wear their suit coats on a Saturday.

Democrats are well aware of this nonsense, as Bente Birkeland of Colorado Public Radio notes:

“At this point [Republicans] are trying to delay so that we can’t get to Democratic priority bills that they oppose on the calendar,” said Senate Majority Leader Steve Fenberg. “We can, but then they will filibuster those so long that we then don’t get to anything else that day. So we are constantly rearranging the schedule as priorities shift and as we pass bills and as the house sends bills over to us.”

“I am very proud of the work that we’ve done in slowing things down and turning some things back, not nearly enough. And we will continue to do that for another week.”

Republicans are gonna obstruct. That’s been their game plan for years, whether it makes political sense or not, so Democrats – particularly in the Senate – are just going to need to keep working around them. That means ignoring the GOP’s threats of delay and pushing ahead with votes on priority issues that have already been debated at length, such as finishing off a sex education measure and a package of Climate Change bills that are widely-supported by Colorado voters. Democrats can also look to SB-181 for reassurance; after a lot of hand-wringing over the oil & gas reform legislation, both Republicans and industry groups now begrudgingly admit that everything is fine.

We have no doubt that lawmakers in both parties are utterly exhausted at this point in the legislative session. But when the finish line is in sight, the smart approach is to dig a little deeper and give it whatever last kick you can manage.