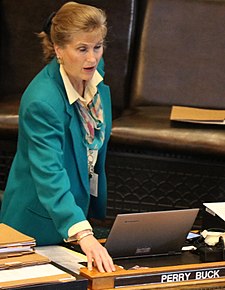 More or less the whole day Friday in the Colorado House of Representatives was wasted on a marathon and factually-challenged debate over House Bill 19-1032, legislation to requiring that if sex ed courses in Colorado are taught, which is not mandatory, that they provide medically accurate and nondiscriminatory information.

As we saw previously in debate over this bill in the House Health and Insurance Committee, there was very little connection between the reality of what this legislation would do and the views of its opponents–who turned public testimony on the bill into a lurid freakshow of ill-informed homophobia. And as 9NEWS’ Marshall Zelinger reported last night, Republican House lawmakers proved every bit as unhinged as the public witnesses–if perhaps a bit less outright vulgar for decorum’s sake.

He didn’t say if he corrected the constituent with accurate information, but here it is: sex education classes in Colorado have been required to include conversations on lesbian, gay, bisexual and transgender communities since the 2013 version of this bill was signed into law by then-Gov. John Hickenlooper.

After hours of gratuitous offense from literally hundreds of such witnesses, many of whom were there only to log their dislike for LGBT people in the permanent record, the bill passed committee–and local media spent the next two weeks unpacking the falsehoods told during this hearing as best they could. But as we saw from House Republicans yesterday, no amount of fact-checking has been able to penetrate the intense misinformation about the bill among its opponents, and at this point the legislation’s “credible” foes at the Centennial Institute simply have no incentive to disabuse their flock of these lies.

And as Zelinger continues, the floor debate took an outlandish twist of its own when:

“You cannot do a one-size-fits-all. My district, the unincorporated God bless them all, don’t want to be told what they think is consent, what they think is their curriculum, everybody has different degrees,” said Buck. [Pols emphasis]

We’re not sure exactly where to start unpacking this, so we’ll just lay the facts out for you like Zelinger did. House Bill 19-1032 defines “consent” as “the affirmative, unambiguous, voluntary, knowing agreement between all participants in each physical act within the course of a sexual encounter or interpersonal relationship.” This definition is legally consistent with the behavior anyone who wants to avoid being charged with the crime of sexual assault must adhere to. To the extent that such a foundational concept in a relationship might be negotiable or variable between…oh wait, consenting adults! There’s that word again. It’s as if there’s no getting away from it…

In truth, no matter which of the Fifty Shades of Gray is your particular shade–and be assured we do not ever want to know the answer, least not in the case of Rep. Perry Buck–a universally accepted definition of unambiguous consent is the place from which everybody needs to start. Not just educationally, or morally, but legally. If this isn’t obvious to you in a position of authority, you might end up like now-Congressman Ken Buck, who as Weld County DA called a 2005 alleged rape he declined to prosecute a case of “buyer’s remorse”–a decision that helped cost him a U.S. Senate seat five years later.

Without invoking a single body part, for which we are grateful, Perry Buck proved again why we need reality-based sex ed.