UPDATE: Into the self-immolating spotlight steps, you guessed it, Rep. Lori Saine: 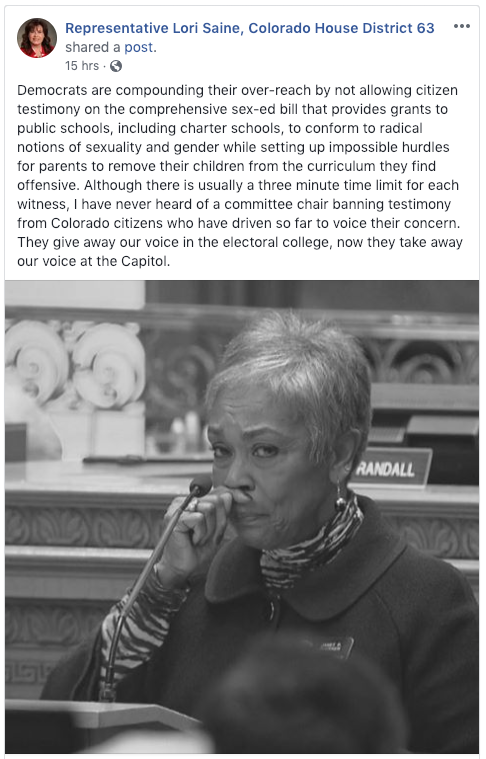 Here you have arguably Colorado’s most infamously shameful Republican, just days off her own national news ridicule for falsely claiming that “whites and blacks were lynched in nearly equal numbers,” complaining about “radical notions of sexuality and gender” and absurdly claiming that “Democrats are compounding their over-reach” by limiting testimony than in fact continued until nearly midnight! Even worse, the photo Saine is using (originally via House Minority Leader Patrick Neville’s front group Advancing Colorado) was taken from a totally unrelated and highly emotional floor speech by Rep. Buckner, recounting racism she personally endured during last year’s commemoration of Martin Luther King, Jr. in the House.

On a day full of small-minded outrages, Rep. Lori Saine manages to stand out. Again. 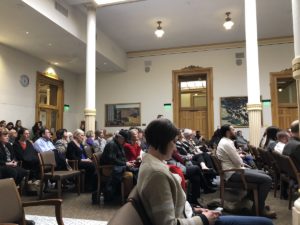 The main event yesterday at the Colorado Capitol was a marathon hearing in the House Health and Insurance Committee that ran until almost midnight taking public testimony on a single bill: House Bill 19-1032, “concerning comprehensive human sexuality education.” Here’s the bill summary:

Conservative Republicans organized by Colorado Christian University’s Centennial Institute delivered an unexpectedly large crowd of witnesses to testify against this bill. After over 300 people (not a misprint) signed up to testify, committee chair Rep. Janet Buckner announced her intention to cut off testimony after seven and a half hours, but in the end testimony went on until just before midnight before the bill was finally advanced on a 7-4 party line vote.

In that time yesterday into early this morning, Democratic lawmakers on this committee were subjected to what we can only describe as the worst verbal abuse from witnesses we’ve perhaps ever seen–easily as bad as the invective from opponents of the gun safety bills passed in 2013, and offensive in a way that should trouble any but the most hardened bigot against LGBT people. Colorado Public Radio’s Bente Birkeland reports:

Many who spoke against the bill went well beyond the language of the legislation to discuss the appropriateness of gay and bisexual relationships, religion, and family values. People described the sorts of sexual acts they didn’t want their children to learn about. One woman brought out a condom and compared the curriculum to how pedophiles groom their victims. Others thought the bill would normalize deviant sexual acts and equated supporting it to child abuse and promoting a homosexual agenda in Colorado.

“It’s a desperate life for this gay lifestyle and the lifespan is short,” Catherine Goodwin told committee members.

“Why are you experimenting with these children, some younger than teenagers, and why are you messing with their minds with information that is basically going to be abnormal?”

“If you’re for House Bill 1032, then you’re for exposing 9-year-olds to sexually explicit techniques,” said James Rea, a father of four. “We don’t want to expose our children to this kind of forced sexual education.”

But Rep. Susan Lontine, D-Denver, flatly rejected that characterization of her bill.

“No, this bill does not do that,” Lontine said. “There is nothing in this bill that says that. That is not the intent of this bill whatsoever.” [Pols emphasis]

“There’s a lot misinformation out there about what this is. This is absolutely not a mandate,” said Alison Macklin with Planned Parenthood.

She says sex education in schools is already happening. What changes is what’s included in that education. The bill requires information about all forms of pregnancy prevention not just abstinence, what’s consent and what’s sexual assault, and safe and healthy relationships whether they be lesbian, gay, bisexual or transgender…

The bill doesn’t mandate sex education, but in schools that do teach it, it must be comprehensive as defined the bill. It also makes pregnancy education optional, but if it’s taught, it must include adoption and abortion.

Parents can opt their kids out of the education without penalty.

The worst of the insults from the crowd were directed against two legislators: Rep. Buckner, the committee chair, smeared as a “pedophile,” and especially freshman Rep. Brianna Titone, the first transgender lawmaker in Colorado history. By all accounts the objectionable and explicit condemnations of the LGBT “lifestyle” from witnesses were most frequently directed at Rep. Titone personally via gestures and eye contact. Given that a large amount of the testimony against House Bill 19-1032 had nothing to do with the actual effects of the legislation, this was personal abuse that no decent person should wish on anyone, to include political adversaries.

The clear intent of yesterday’s mobbing of this hearing by the religious right was to push a sense of outrage over Democratic control of the legislature and the state’s history-making new governor who happens to himself be a gay man. But rather than supporting the “overreach” narrative Republicans are desperate to see take hold as they hype the threat of recalls and political destruction for Democrats after their own historic defeat just last year, this hearing mostly helped cement the image of Colorado Republicans as the party of the hateful political fringe.

The debate over House Bill 19-1032 will not mark the beginning of any Republican comeback in Colorado. If anything, we are seeing luridly demonstrated once again why Colorado Republicans lost–and why they are fated to keep losing.