What The Mueller Report Does And Doesn’t Mean 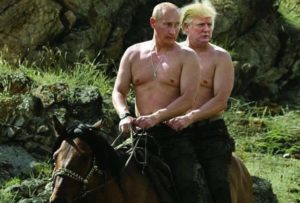 Politico reports on the story set to dominate the week in Washington political news, the hotly-debated “summary” by Trump ally and Attorney General William Barr of the conclusions of a report by Special Counsel Robert Mueller on the investigation into Russian meddling in the 2016 elections to support President Donald Trump’s unlikely victory.

Though Republicans are tripping over themselves to declare Trump “exonerated” by Barr’s opinion of Mueller’s report, there’s little factual basis for that conclusion–and many essential questions left to be answered:

“The investigation did not establish that members of the Trump Campaign conspired or coordinated with the Russian government in its election interference activities,” the special counsel wrote in his findings, which Attorney General William Barr released on Sunday in four-page summary form.

Mueller’s long-awaited findings also do not take a clear position on whether Trump obstructed justice, a gray-area conclusion that leaves the door wide open for an already-heated debate in Congress over whether Democrats should even consider impeachment proceedings against the president.

“For each of the relevant actions investigated, the report sets out evidence on both sides of the question and leave unresolved what the special counsel views as ‘difficult issues’ of law and fact concerning whether the President’s actions and intent could be viewed as obstruction,” Barr wrote in a letter to the key House and Senate committees.

“The Special Counsel states that ‘while this report does not conclude that the President committed a crime, it also does not exonerate him,’” Barr added. [Pols emphasis]

The phrase “does not exonerate” appears to have lost a key component in translation from the Special Counsel’s report, as eagerly disseminated by President Trump and Colorado Republicans–the “does not” part.

With a very large gap still evident between the reality of this investigation and Republican spin following the release of Barr’s summary, attention now is turning to the next logical Democratic priority: release of the unredacted full report provided by the Special Counsel to the Department of Justice. 9NEWS reports that two Colorado members of Congress will be closely involved with that effort on the House Judiciary Committee:

The Justice Department said Mueller delivered his final report to Attorney General William Barr, who will now review the report and relay the conclusions to the House and Senate Judiciary committees.

We’re going to go out on a limb and suggest that Rep. Joe Neguse will be substantially more persistent in the public disclosure of the Mueller report than Rep. Ken Buck–and the difference between Buck’s eagerness to investigate any number of supposed Democratic misdeeds versus slow-walking the Mueller report will be a useful contrast. A great deal depends on the evidence “on both sides of the question” set forth in the full report that Barr doesn’t address with any specifics. In addition, it’s likely that Mueller himself will be called to testify to clear up these ambiguities.

Democratic Speaker Nancy Pelosi has been clear for months now that the bar to commence an impeachment proceeding would be very difficult to clear–a revelation that not even the most hardened pro-Trump Republican could ignore. In the end Mueller’s investigation into the 2016 elections was always more likely to produce facts for voters to resolve electorally than an impeachment of Trump, which is why the Trump administration is trying desperately to control the release of those facts. It’s almost certain that more damaging disclosures are just around the corner.

What Americans do know now with no real partisan dispute is that the Russians wanted Donald Trump to be America’s President. If you accept as axiomatic that Russia does not have positive outcomes for America in mind when they meddle in our elections, which most observers do, the question of whether Trump actively colluded with the Russians or passively reaped the benefits of their election meddling becomes less significant.

The Russians helped Trump win, and it wasn’t to make America “great again.”