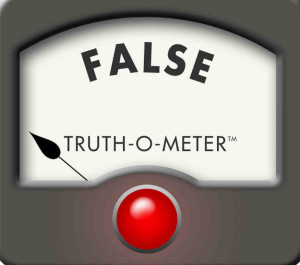 Marshall Zelinger of 9News breaks down a television ad you may have seen over the weekend from oil and gas industry opponents of SB-181, legislation that seeks to prioritize health and safety concerns in decisions about drilling and extraction. The verdict is another strike for the industry’s flailing narrative of opposition:

CLAIM: “But a handful of politicians didn’t like that result and think they knew better. So now they’re trying to ignore the voters and pass a law in the middle of the night, to shut down energy production in Colorado.”

VERDICT: This section is full of overstatements.

“Pass a law in the middle of the night” is not accurate at all. [Pols emphasis]

The bill, Senate Bill 181, is the oil and gas reform bill that would give local governments control over where oil and gas operations could set up. It would also change the makeup of the Colorado Oil and Gas Conservation Commission – the state regulators – to include fewer members from the oil and gas industry and one with an expertise in public health. The commission would also have to start making decisions considering public health and safety first.

The first committee hearing for this bill was on March 5. The hearing started at 2 p.m. The vote that passed it out of the committee didn’t happen until nearly 2 a.m. 9NEWS had a camera and reporter at the committee hearing, as did other news media. The public testified before and against the bill throughout the 12-hour hearing. While the bill was voted on early in the morning, it wasn’t passed blindly with no one noticing or participating.

As we’ve pointed out before in this space, arguments that Democratic lawmakers are being secretive about the legislation and speeding the bill through the State Capitol are just plain silly and easily refutable. Attempts to muddy the story being told by Erin Martinez, whose family was devastated after a home explosion in Firestone, have fallen equally flat.

Senate Bill 181 made it through the State Senate last week. Today it makes its first stop in a State House committee, one of three committees it will go through before a floor discussion and vote.

Today begins the third full week of discussions about SB-181.