We wrote earlier today about efforts by oil and gas interests to delay legislation intended to prioritize the health and safety of Coloradans over profits or other motives in regulating oil and gas drilling operations. The O&G industry is pushing hard to establish a narrative of Democrats crafting Senate Bill 181 in secret and “rushing” the bill through the legislature.

This narrative runs into trouble, however, when you remember that Democrats HELD A GIGANTIC PRESS CONFERENCE ANNOUNCING THE LEGISLATION just last week. Take a look at this headline from the Denver Business Journal in which the photograph used at the top of the story completely contradicts the headline: 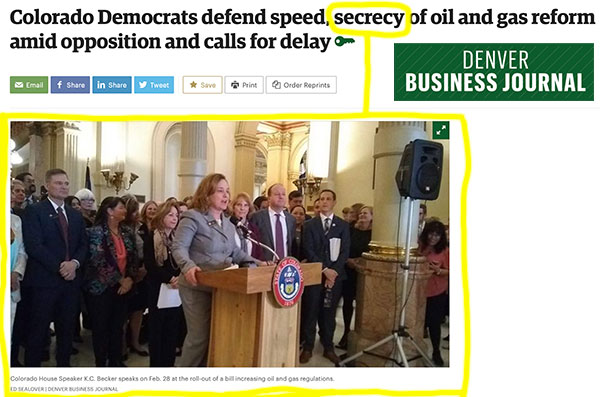 This was such a big secret that dozens of people — including the House Speaker and the Governor — gathered for a press conference last Thursday. From the Denver Business Journal, 3/4/19

As we also mentioned earlier today, the O&G industry is panicking over their loss of control with Democrats in charge of both legislative chambers and a Democrat in the Governor’s office, which has them resorting to specious claims of a secret, super-fast bill process.

Headline aside, Ed Sealover’s story for the Journal does include a few telling quotes about how and why the industry ended up here in the first place:

Becker said at a Monday morning media briefing that she believes there will be plenty of time to discuss what is likely to be one of the most debated bills of 2019. It will have to go through the energy, finance and appropriations committees before getting to the Senate floor and then run another gauntlet of three committees in the House, giving people plenty of opportunity to comment on the measure, she said…

…But she also said pointedly that there was a lack of trust for some in the industry after the campaign for Amendment 74, which would have given property or mineral-rights owners greatly expanded ability to sue local governments for any decisions they make that could impair the value of their properties. Statewide voters defeated that measure, which Becker called “such bad policy and so destructive,” handily in November.

The O&G industry tried to pass a destructive measure in Amendment 74 so that they could have leverage in discussions with lawmakers. That didn’t work, so now the industry is left grasping at laughable straws like “secrecy” that are easily disproved.