Amendment 74: Now Its Backers Should Be Shunned 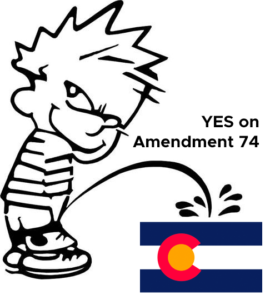 In a week packed with compelling political stories in Colorado, we wanted to circle back with a few parting words about the failed Amendment 74–a constitutional ballot measure that if passed would have radically altered takings laws in Colorado, forcing either the mass curtailment of zoning and other land use regulations or enormous payouts to business interests who felt the “value” of their property was diminished by such laws.

As the Denver Post’s John Aguilar reports, in the wake of Amendment 74’s defeat, the Colorado Farm Bureau–a storied organization founded in 1919 to represents the interests of agriculture and rural communities generally–is taking the public-relations fall:

Amendment 74, the measure that would have allowed property owners to file a takings claim against the government when a government action or regulation reduces their property’s value, was turned down by voters by a 54-percent to 46-percent margin with more than 1.9 million votes counted Wednesday morning…

This statement from the CFB’s spokesperson, like the whole facade of the Farm Bureau’s public face for Amendment 74, simply has no basis in reality. This is an initiative that was opposed by virtually every local government in Colorado. The opposition to Amendment 74 was spearheaded by Democratic Gov. John Hickenlooper and Republican former AG and Colorado Springs Mayor John Suthers, and condemned by every editorial board in the state–to include, belatedly, the idiots at the Colorado Springs Gazette. To suggest that the opposition to Amendment 74 was some kind of Washington, D.C.-based undertaking is demonstrably ridiculous.

The hypocrisy of this response to the defeat of Amendment 74 from the Colorado Farm Bureau is especially galling when you consider that, although their organization was the public face of the campaign, Amendment 74 was literally 99% funded by the oil and gas industry. This was a campaign whose true backers cynically hid themselves behind the much more sympathetic visage of farmers. In reality, the wide-ranging disruption that would have resulted from passage of Amendment 74 would have hurt agricultural interests too, along with (and this is not an exaggeration) everyone else in Colorado except the tiny fraction cashing in at taxpayer expense. As the true extent of this deception was unraveled, it became increasingly more difficult for Amendment 74 supporters to justify their position.

Once you understand just how destructive the seemingly simple language of Amendment 74 would have been in our state’s constitution, the next logical question must be about the irresponsibility of its proponents. Spending millions to enact this devastating end run around the most basic land use powers that local governments (and voters) have taken for granted their entire lives is not something that good-faith partners in civil society do. Any next time an oil and gas company goes before any local or state body to ask for permission to set up operations, Amendment 74 should hang over their heads like a cloud. You say you want to do right by the communities you frack?

As for the Colorado Farm Bureau? This disgraceful episode is not what that organization was ever founded to do. And before anyone takes them seriously in state or local politics again, heads should roll.