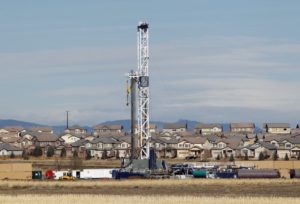 Back the frack up

As the Denver Post reports today, the oil and gas industry is positively panicking about the situation at the State Capitol:

The fossil fuels industry’s two main lobbying groups on Sunday issued an appeal urging Colorado lawmakers to delay a legislative hearing for discussion of an oil and gas bill, warning of “grave impacts” and arguing that lawmakers first should conduct “a legitimate dialogue.” [Pols emphasis]

Lawmakers for months have been preparing this legislation including measures aimed at prioritizing public health and safety. The legislation in the works addresses mapping to show the locations of oil and gas lines, pollution from the industry and the controversial practice of “forced pooling” that lets companies drill for oil and gas even when mineral property owners object.

Democrats plan to hold the first hearing on Senate Bill 181 on Tuesday, noting that there will be a total of six public hearings and four legislative votes before the bill could make it to the desk of Colorado Gov. Jared Polis. Don’t forget: The Colorado legislature is only in session for 120 days.

Asking legislators to delay is a standard approach from interest groups looking to derail a particular bill. The O&G strategy is to drag out the debate to give them more time to lean on specific legislators, with the hope that they can create enough public pressure to flip votes in their favor. This kind of strategerie is similar to what right-wingers did in 2009-10 in an attempt to derail the Affordable Care Act; after 18 months of generally pointless debate and screaming from the newly-formed “Tea Party,” Democrats finally stopped acceding to GOP delaying tactics and pushed it through to the desk of President Obama.

It is a rich bit of irony that the O&G community wants lawmakers to slow down; remember that this is an industry that spent millions of dollars trying to pass a massively-flawed ballot measure (Amendment 74) last fall — for the primary purpose of giving themselves more leverage in future drilling debates. In the parlance of poker, the O&G industry is holding a junk hand at the moment, and they aren’t even going to try to bluff their way forward.

The O&G industry spent tens of millions of dollars on the 2018 election, in support of Amendment 74, in opposition to Proposition 112, and in support of numerous Republican candidates for the state legislature. Democrats claimed historic victories nonetheless. In 2020, the industry is again going to support Republicans over Democrats no matter what happens with SB-181.

The O&G industry has been trying to sweep away this type of legislation for more than a decade now. Democrats see this delaying tactic for what it is.