The Hollow Argument of Going “Too Fast”

Opponents of legislation to prioritize health and safety in decisions about oil and gas development have focused their strategy on one very vague argument: That the process for deliberating Senate Bill 181 is happening too quickly. This is dumb.

Complaining that a legislative approach is “too fast” is an intellectually lazy and intentionally ambiguous approach often used by interest groups that have otherwise run out of talking points. It is a “problem” that never includes a solution, which is exactly why it is so often employed as a political strategy — and also why it shouldn’t be taken seriously by lawmakers.

As the Denver Post reported on Monday, the two main lobbying groups for the oil and gas industry have been griping about what they say is a lack of “a legitimate dialogue.” This is what the O&G industry considers to be “too fast”: 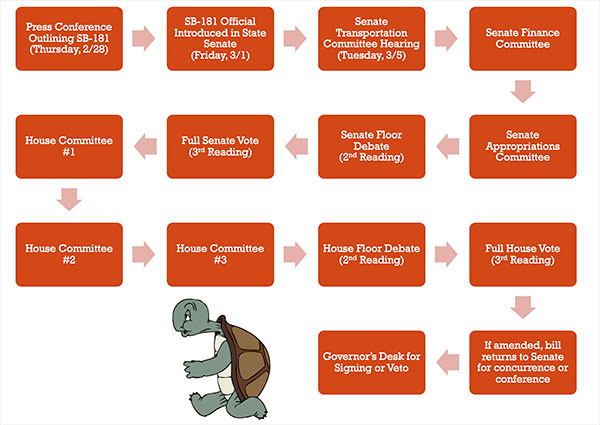 Whoa — hold on to your hat!

Senate Bill 181 will be heard in 6 legislative committees — three in the Senate and three in the House. It will be debated on the floor of both the Senate and the House, and legislators in each chamber will cast a vote in support or opposition. If the bill is amended in the House, it will return to the Senate for concurrence or conference committee. It is only after this point that the bill might end up on the desk of Gov. Jared Polis for his signature or veto.

“Too fast?” It takes 30 minutes just to sketch out the process.

If you are going to employ this “too fast” argument, you should be prepared to answer a perfectly reasonable follow-up question: What is the appropriate amount of time to devote to a specific piece of legislation?

There are just 120 days in the legislative session, during which time lawmakers will discuss and debate hundreds of different bills. Senate Bill 181 will still be subject to dozens of hours of testimony from hundreds of people. Anybody who has ever attended a legislative hearing knows that the same handful of talking points are repeated by everyone who testifies, but Coloradans will still be heard.

“Too fast?” What’s your rubric? What is the correct amount of time to devote to a single bill? How many committee hearings do you need — a dozen? Two dozen? It’s worth noting that there have been more people testifying IN FAVOR of SB-181 than in opposition, and they aren’t whining about things going too fast.

As Tyler Silvy writes for the Greeley Tribune, the “too fast” argument doesn’t hold up to scrutiny:

Senate Majority Leader Steve Fenberg didn’t laugh, but he did say it was funny that industry groups were putting on such a public show, as they were all involved in the process, and nothing in the bill should come as a surprise to them.

Fenberg said he has met with anybody who requested a meeting, including COGA, the American Petroleum Institute, Noble Energy, Anadarko and Extraction, among many others…

…Fenberg has an idea as to why industry groups and Republicans are railing against the process, saying it’s more about stalling than anything

But don’t just take Fenberg’s word for it. Take a look at what Colorado Petroleum Council Executive Director Tracee Bentley — one of the main O&G lobbyists — eventually admitted to the Tribune:

In a follow-up statement sent to The Tribune on Sunday night, Bentley acknowledged that industry groups met with Democratic leadership and offered potential solutions. [Pols emphasis]

The only speed that the oil and gas industry would actually endorse is a full stop, which is the playground equivalent of taking your ball and going home. Last fall, Colorado voters overwhelmingly supported a Democratic majority in the legislature and a Democratic candidate for Governor; Democrats are now doing what they said they would do, and they aren’t leaving anyone out of the discussion.

Complaining about “process” is the last refuge of those who have already lost the argument.