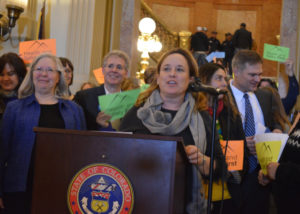 Speaker of the Colorado House KC Becker speaks at a rally for SB19-181.

Yesterday’s 12-hour hearing for Senate Bill 19-181, this year’s landmark legislation to return some control over oil and gas drilling to local communities as well as getting the state out of the business of “fostering” the industry over public health and safety, –the Grand Junction Sentinel’s Charles Ashby reports:

Hundreds of people descended on the Colorado Capitol on Tuesday to speak for and against a sweeping reform of how the state deals with oil and gas drilling.

After rallies on the Capitol steps talking about how much they liked or disliked Senate Bill 181, proponents and opponents of the measure introduced by two Boulder Democrats — Senate Majority Leader Stephen Fenberg and House Speaker KC Becker — came inside the Capitol and spent hours talking to the Senate Transportation & Energy Committee about the bill.

One by one, they told the seven-member committee how the bill either would negatively impact the production of a long-standing industry that has created thousands of jobs and generated millions in tax revenues or would take a bold step to protect the health, safety and welfare of Colorado residents.

More than 400 people were signed up to testify for and against the bill.

Before the hearing, a rally took place on the west steps of the Capitol, which was attended by hundreds in the energy industry. Some workers confirmed to FOX31 their company gave them the day off to come to the Capitol and testify… [Pols emphasis]

“The sponsors of this bill hate everything about you guys. They hate your job and they hate Weld County,” said State Sen. John Cooke (R-Weld County).

It’s a point that needs to be restated as we have in previous years: the oil and gas industry’s “rallies” at the state capitol building, though attended by hundreds of people, are not authentic gatherings of concerned citizens but company-sanctioned events attended mostly by oil and gas industry employees who are earning their regular salary or wage to be there. It’s not really correct to state that workers “have the day off”–more like they’re on political duty and on the clock. The intended effect of the undeniably large crowds who show up for these rallies is to show grassroots support for the oil and gas industry, when in fact it’s the opposite.

But for all the deliberate organizing and literal “bussing in” of on-the-clock energy industry workers, something unexpected happened in the hearing for Senate Bill 19-181:

I’ve run a dozen oil and gas bills, and they always draw a crowd. In this case, 221 signed up to support the bill; 174 signed up to oppose. We’ve been getting an earful alright, but about how the system is broken and needs reform now.

There were still more witnesses who testified in favor of SB19-181 than against it. That’s a very big deal: in every high-stakes political debate, a factor known as an “intensity gap” plays a central role–a fundamental difference in the passion for or against an issue exhibited by the opposing sides. In 2013, during the recall campaigns that resulted from the passage of gun safety legislation, intensity rightly or wrongly was on the side of the gun lobby and the low-information vitriol they whipped up against targeted lawmakers. Since 2013, a key dynamic we’ve tracked is the flagging intensity of gun rights supporters as their bogus predictions of doom failed to materialize.

Yesterday, the oil and gas industry showed that they have hundreds of employees who can be made to appear in one location. And that’s noteworthy. But opposite them were hundreds of grassroots supporters of stronger protections for local communities from oil and gas drilling, and excepting some activist organizations present were not paid to be there. And in the count that matters, witnesses for and against the bill in question, the unpaid grassroots prevailed.

If that’s not your biggest takeaway from yesterday’s dueling rallies and marathon hearing, it should be. Just like with the gun issue since 2013, the real grassroots intensity on oil and gas in 2019 has shifted to match the results of the 2018 Democratic wave election that swept this new majority into power. “AstroTurf,” for which a protest of paid employees amounts to a textbook definition, is no longer enough.