Cracking Down On Vaccine Scofflaws: No Brainer, Right? 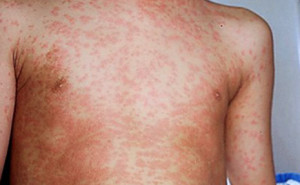 Denver7’s Jennifer Kovaleski reports on legislation awaited in the Colorado General Assembly that would tighten Colorado’s very loose standards for immunization of children in order to attend public school, proposing the elimination of a “personal belief” exemption considered responsible for the state’s bottom-of-the-nation ranking on immunizations even ask preventable epidemics rage in other states:

“To hear that we were last in the entire country was concerning, it was embarrassing,” said Rep. Kyle Mullica, D-Northglenn. “This is not a political issue, this is about our kids being safe.”

Mullica is drafting legislation that could eliminate the personal belief exemption in Colorado, which lets parents opt out of vaccinating their kids for personal reasons.

We’ve written at length in this space about battles over child immunization policy in the Colorado state legislature in the past few years, mostly stemming from a push from suburban Republican lawmakers like former Sens. Tim Neville and Laura Woods to further weaken the state’s already highly permissive standards. Sen. Woods warned baselessly of children being “rounded up and vaccinated” in Denver schools, while Neville tried to do away with the opt-out waiver process for immunizations altogether as a “privacy issue.”

Woods and Neville represented an extreme on the issue of vaccinations, but as Denver7 continues, the opposition to Rep. Kyle Mullica’s bill to eliminate the personal belief exemption–a significant step in the other direction–includes as of this writing none other than Gov. Jared Polis himself:

“Governor Polis is concerned about how low vaccination rates negatively impact public health. He believes there are successful strategies we can use to increase vaccination rates that don’t put big government in the middle of the parent-child relationship and protect our freedom,” a spokeswoman said in a statement. “Governor Polis believes that forcing people to receive shots they don’t want creates mistrust of government, mistrust of vaccinations, and would ultimately backfire and hurt public health.” [Pols emphasis]

And with that, we have a disagreement that is no longer a clean partisan split–which it never really was, despite the recent backward push on the issue from local Republicans. It’s not entirely unexpected either, after the Colorado Sun’s John Frank reported last week that Polis opposed mandatory vaccinations in Congress–even though Gov. Polis makes clear that his own children have been vaccinated and he personally thinks it’s the right thing to do.

With outbreaks of preventable diseases in other states continuing to lend urgency to the debate over Colorado’s low rate of childhood vaccinations just as they did a few years ago when Neville and Woods brought their ill-conceived legislation, and all credible research continuing to soundly reject the idea that vaccines produce the vast range of negative health effects its often pseudoscientific critics insist they do…

Sorry, folks, but this is not an issue that has any room for political spin. If Rep. Mullica’s approach is not the right way to move Colorado out of literal last place with regard to childhood immunizations, let’s hear the alternative. Because the problem is not up for responsible debate.