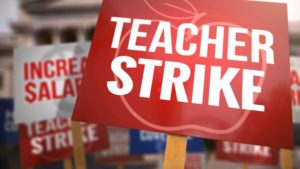 Vox’s Alexia Fernández Campbell reports on the developing conclusion to the three-day strike by teachers of the Denver Classroom Teachers Association, ending in victory for the teachers and heralding a new ascendancy for organized labor power in Colorado under Gov. Jared Polis:

Details are not yet available, but the deal includes an average 11.7 percent pay raise and annual cost of living increases, according to the school district and the Denver Classroom Teachers Association, a labor union representing more than 5,000 educators in Denver public schools. It will also include raises for school support staff. Bus drivers and cafeteria workers may also get a raise, but that’s not part of the official agreement with the teachers union.

It also addresses the teachers’ biggest concern: the need to overhaul the merit-pay system, which relies heavily on annual bonuses that fluctuate from year to year. The new system will place more emphasis on education and training when considering promotions, while keeping some bonuses in place…

Teachers did make some concessions, but the deal represents a remarkable win for Denver’s teachers, who have been picketing and rallying in the streets for the past two days, while school administrators struggled to keep classes on schedule. It’s also a sign of the overwhelming momentum teachers have on their side from months of widespread teacher strikes across the country over school funding cuts and low teacher pay.

After the DCTA voted by 93% to walk out, the state Department of Labor and Employment under the direction of Gov. Polis could have ordered a so-called “cooling off period” of up to six months, which would have deprived teachers of their power to back up their negotiations with action. There was considerable worry that Polis would do just that, especially after the governor and his staff took an active role in attempting to mediate between the sides early on.

In the end, though, the decision by Gov. Polis not to curtail the teachers’ ability to strike made it clear who would have the upper hand. In addition Denver Public Schools management did very little to ingratiate themselves with the public, after a message to visa-holding noncitizen teachers wrongly threatening to report them to immigration officials and stories of school administrators trying to censor students documenting the dysfunction on campus.

The proposed new contract, which still needs to be ratified by the teachers, gives the teachers much more than they were offered before the strike–which is, of course, the most important measurement of success. And for Gov. Polis, his campaign promise to be an advocate for working people and organized labor in particular is looking well-kept as of now.