Sucks To Be Jane Norton’s Spokesman 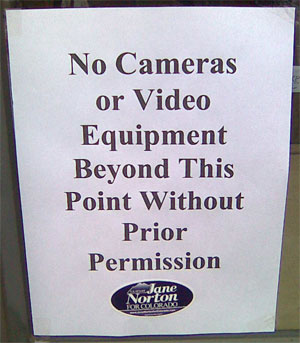 The Colorado Independent reports, following up on points made by ex-Rocky Mountain News columnist Jason Salzman earlier in the week:

Senate candidate Jane Norton is being hammered in campaign ads for her support of Referendum C in 2005, which allowed the state to spend roughly $3.7 billion in tax revenues slated to be refunded to tax payers. Conservative voters in the state see Ref C as a major tax hike and a betrayal of the state’s Taxpayer Bill of Rights. The campaign ads are part of an increasingly heated Republican primary battle. Norton is putting out her own campaign ads, one of which- a 60-second spot Politico reports looks more like a news update- targets Pres. Obama, a favored tactic of the Norton campaign so far.

Norton has been the effective frontrunner in the race since she entered in September. A long time political insider whose candidacy was boosted by Washington lobbyists and the national GOP, Norton has made it an unofficial policy that she doesn’t talk about or to her opponents. Nor does she talk to the press.

In reporting the story today, the Denver Post and Politico both talked to Norton Campaign spokesman Nate Strauch. That’s no surprise. As media critic Jason Salzman pointed out in a post at his Big Media blog, yesterday, spokespeople and pre-recorded soundbites are Norton’s preferred modes of dealing with the media…

The trouble is, as the Independent updates this morning, the spokespeople are kind of mangling what’s left of the message after Norton hands it off–maybe not their fault? Maybe there’s only so much you can do? It’s a bit of a tough job some days.

Young energetically anti-big government PPC blogger Ari Armstrong, like many Coloradans, wanted to get straight what Norton meant this week when she said the Obama administration jobs bill was “too small,” a response that suggested longtime government employee Norton was advancing a government solution to the jobs crisis. Armstrong didn’t get hold of Norton; he got hold of her spokesman Nate Strauch. Suffice it to say, Armstrong got the better of Strauch in the exchange which, given what he has had to deal with week to week as Norton drops bombs at small gatherings across the state, is to say nothing against Strauch.

What Norton meant to say, explained Strauch, was that she would cut taxes to small businesses!

Armstrong appreciated the late-game sloganeering but didn’t really buy it as a policy stand. He also joined the chorus of writers mocking Norton’s commitment to communication with the people she aims to represent.

Yeah, we figured that “too small” stuff might be trouble, and there you go. Surely, though, Nate Strauch shouldn’t find that any harder to backflip around than the federal government having “no role” in health care (except Medicare of course, don’t be silly!). You can certainly understand why they are trying to keep an iron grip on Norton’s troublesome off-script availability, though–among other things, it’s a big factor in how her spokesman’s next day at the office goes.