A Colorado representative said black people and white people were lynched in nearly equal numbers for being Republican in the post-Reconstruction era.

Rep. Lori Saine, R-Firestone, made the claim on the Colorado House floor Friday, and posted the video to her Facebook page Monday, saying it was in defense of House District 49 Rep. Perry Buck, R-Windsor, who tried to introduce a resolution honoring King…

Herod said Buck was added as the first co-sponsor of the resolution, and she said Buck spoke very eloquently. 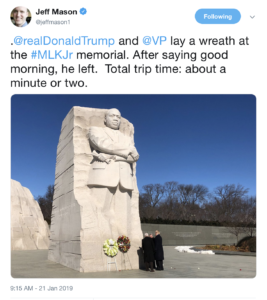 Via Jeff Mason, White House correspondent for Reuters (and a Colorado native).

Today is Martin Luther King Jr. Day, a federal holiday first observed in 1986 to honor and remember one of America’s most important civil rights leaders. Naturally, white Republican elected officials in both Washington D.C. and Colorado have been using the occasion to appropriate Dr. King’s message for their own political needs.

President Trump made a brief visit to the MLK Memorial in Washington D.C. today. As the Huffington Post reports, Trump didn’t bother to speak the words “Martin,” “Luther,” or “King” in his very brief trip:

The president did not mention the civil rights icon during the visit, which ended about two minutes after he arrived.

“Good morning, everybody,” Trump told reporters after laying a wreath in front of the monument. “It’s a great day. It’s a beautiful day. And thank you for being here. Appreciate it.”

Vice President Mike Pence tagged along for the surprise trip. Neither Trump nor Pence had public events listed on their schedules for Monday, the second Martin Luther King Jr. Day observed since Trump took office in January 2017.

Trump faced scrutiny last year when he did not attend a public event on Martin Luther King Jr. Day. Instead, he visited one of his golf clubs in Florida.

“Martin Luther King Jr. was a bridge builder, not a wall builder.”

Vice President Mike Pence joined Trump for today’s visit, which came one day after Pence was roundly criticized for comparing Dr. King to our 45th President. From NBC News:

Appearing on CBS’ “Face the Nation” on Sunday — a day before the federal holiday honoring King — Pence quoted a passage from King’s “I Have a Dream” speech at the Lincoln Memorial in Washington on Aug. 28, 1963: “One of my favorite quotes from Dr. King was ‘Now is the time to make real the promises of democracy.'”

Speaking of King, the vice president went on: “You think of how he changed America. He inspired us to change through the legislative process, to become a more perfect union.

“That’s exactly what President Trump is calling on Congress to do — come to the table in the spirit of good faith,” Pence said. [Pols emphasis] “We’ll secure our border. We’ll reopen the government, and we’ll move our nation forward, as the president said yesterday, to even a broader discussion about immigration reform in the months ahead.”

Of course, we don’t have to wonder about what King might have thought about a border wall. In 1964, King delivered a speech in East Berlin, Germany about the immorality of a wall built to divide people.

Dr. King’s son, Martin Luther King III, was not at all amused by Pence’s comments. As Julian Zeilizer writes for CNN, Pence’s comments aren’t just inappropriate — they are completely innacurate: “The comments made by Pence — who works at the top of an administration that promotes policies that directly contradict King’s message — fly directly in the face of Martin Luther King’s legacy.” 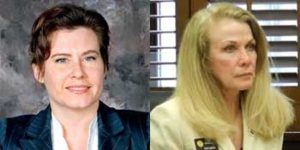 But it’s not just America’s highest-ranking white dudes who are using Dr. King’s legacy as a crutch for their own nonsensical narratives. On Friday, State Rep. Lori Saine (R-Firestone) delivered a bizarre speech on the House Floor in support of a resolution honoring Dr. King. Here are the first words that came out of Saine’s mouth:

Colleagues, we are standing in the moral arc of history today as we celebrate a reverend who changed history for all Americans. We have come a long way on that arc since the reconstruction, when whites and blacks alike were in nearly equal numbers lynched for the crime of being Republican. [Pols emphasis]

Saine’s “equal numbers” comments are more than a little off. Yes, some white people were lynched at the end of Reconstruction. Some of these white people were probably Republicans. But that’s about as far as you can go in Saine’s defense. In April 2018, The Guardian newspaper examined America’s history of lynching, which doesn’t square with anything Saine said on Friday:

For decades, the most comprehensive total belonged to the archives at the Tuskegee Institute, which tabulated 4,743 people who died at the hands of US lynch mobs between 1881 and 1968. According to the Tuskegee numbers, 3,446 (nearly three-quarters) of those lynched were black Americans.

The EJI, which relied on the Tuskegee numbers in building its own count, integrated other sources, such as newspaper archives and other historical records, to arrive at a total of 4,084 racial terror lynchings in 12 southern states between the end of Reconstruction in 1877 and 1950, and another 300 in other states…

Saine went further in her comments, using the opportunity of HJR19-1006 to highlight the plight of the Republican minority in the state legislature, or something:

Therefore, colleagues…how could I honor Martin Luther King today without shining a light on injustice myself? My colleagues – how can you redeem your marginalized voice by marginalizing ours? Our march towards justice is not over when a colleague is barred from introducing a resolution on this floor because of the color of her skin. Our march of justice is not over when a member of this body who represents Americans of races, creeds and religions is told that Martin Luther King does not represent her heritage.

This is the very same Rep. Lori Saine who once brought a box of fried chicken to a committee hearing as a “silent protest” after State Sen. Vicki Marble was criticized for using the occasion of a different committee hearing on poverty to explain that black people were in poor health because they ate too much fried chicken.

As Dr. King once said, “The arc of the moral universe is long, but it bends toward justice.”

May it also bend toward things like truth and facts.