At Least She’s Not Your State Senator Anymore 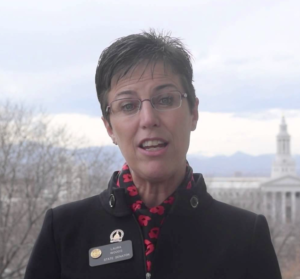 Former State Senator Laura Woods was always a difficult problem for Republicans. Woods is nuttier than a bag of trail mix, but she played an important role for the GOP in the 2013 recall attempt of Sen. Evie Hudak (D-Arvada) that ultimately resulted in Hudak’s resignation. Woods used that recall organizing effort to get herself elected to SD-19 in 2014 to fill the remainder of Hudak’s term, and she spent the next two years engaged in any number of crazypants legislative strategies as a member of the GOP’s “Hateful Eight.”

The “Laura Woods Problem” was more or less solved in the 2016 election cycle when Woods lost her bid for re-election to Democrat Rachel Zenzinger in a rematch of their 2014 race. That battle in SD-19 was the single most-watched state senate race of the cycle for Democrats looking to regain a majority in the State Senate and to right a wrong that had ended Hudak’s legislative career.

Woods hasn’t left politics behind entirely; she still Tweets under the handle @SenLauraWoods because of course she does. On Tuesday evening, Woods shot off a take on the unreliability of polling data that proves, once again, that SD-19 voters were right to get rid of her:

Polls are pure BS! My proof…did they call and ask you or me? No. They are always Dem heavy polls but don’t say so. Keep it shut down until the wall gets built!! https://t.co/ozR4LRxFYR

Most polls include a disclaimer for margin of error based on sample size, demographics, etc., but perhaps they should also start including a note on whether or not they attempted to contact Laura Woods.

Indeed, philosophers have long wondered: If a tree falls in the forest and it doesn’t hit Laura Woods, does it still make a sound?