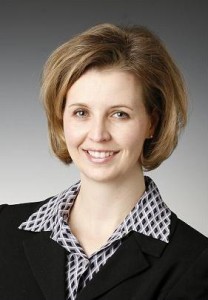 In a press release this morning, former Arvada city councillor and appointed Sen. Rachel Zenzinger announces she will run again for the ultra-swing SD-19 seat she lost in 2014 by a razor-thin margin to Republican Laura Waters Woods:

Rachel Zenzinger, a former teacher and former member of the Arvada City Council, today announced her candidacy for the Colorado State Senate.

The former State Senator pledged that her No. 1 focus when she regains the seat will be to build a stronger middle class.
“While the economy may be stabilizing for some, many are being left behind,” she said. “True economic recovery means all hardworking Coloradans have opportunities for good jobs, with fair pay, and a chance to get ahead.”

A mother of two young girls, Zenzinger understands the effects of the rising costs of housing, food, and health care. She knows firsthand that families are still struggling, challenged by issues such as skyrocketing tuition and childcare rates, and the high cost of elder care.

“We need a Senator who will stand on the side of hardworking families, not bow to an extreme party fringe. My opponent voted to increase income taxes on our active duty military service men and women (HB 15-1181) and elevated lobbyists, special interests, and big business above middle class families (SB 15-078). Westminster, Arvada and the entire state deserve better.”

The loss of the highly competitive SD-19 seat in 2014 resulted in Republicans taking control of the Colorado Senate. In 2016, the situation is different, with revenge in SD-19 one of several paths for Democrats to retaking a Senate majority. With that said, SD-19’s narrow margin of victory for Woods, under 700 votes, makes a rematch with Zenzinger in a presidential election year very promising. We anticipate no primary challenger for Zenzinger, but we still haven’t heard if Republicans still nervous about Woods’ far-right-trending-looney political stands intend to mount another red-on-red challenge against her.

At this point, Democrats tell us they are happy, even relishing the chance to run against Woods, especially with Zenzinger as their candidate. Whatever happens, this will certainly be one of the marquee legislative races of 2016.