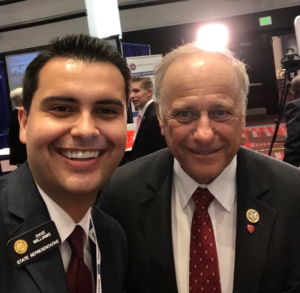 Colorado Christian University “generally” doesn’t repeat speakers at its annual conservative gathering near Denver, said the event’s director Jeff Hunt when asked whether a Republican Congressman, who advised people not to be offended by white supremacy, would be invited to the annual event again this July.

Iowa Congressman Steve King, who made the comments to the New York Times, spoke at the last year’s Western Conservative Summit, billed as the “largest gathering of conservatives outside of Washington D.C.”

Hunt directs the summit in his role as head of CCU’s Centennial Institute.

On a House floor speech, “King argued he was saying terms like white supremacist, white nationalist and Nazi were ‘almost always unjustly labeling otherwise innocent people,” according to the Des Moines Register.

In the wake of a controversial comment by King in 2010, then congressional candidate Cory Gardner canceled a joint fundraiser with the Iowa Congressman.

King is now facing disciplinary action from fellow U.S. House Republicans after he told the New York Times it was wrong to consider white nationalism and white supremacy offensive.

“White nationalist, white supremacist, Western civilization — how did that language become offensive?” Mr. King told The New York Times Jan. 10. “Why did I sit in classes teaching me about the merits of our history and our civilization?”

Republican House Minority Leader Kevin McCarthy told CNN over the weekend that he would meet with King today and “action will be taken.”