(MAGA, everybody – Promoted by Colorado Pols) 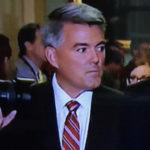 The Chair of the Adams County Republican Party joined other Colorado conservatives today in hot rage against U.S. Sen. Cory Gardner for calling for an end to the government shutdown without funding a border wall.

“They have no steel spine, Pete, as you know,” said Mathai on air. “They’re afraid to take a position on anything. I mean, it’s very clear, they put their finger [in the air] and whichever way the wind blows. Right now, they cower down and don’t say a word…. The Republican Party – we don’t know what they stand for anymore.”

Mathai went on to say that there is a “cowardice here within the Republican Party” that’s exemplified by Gardner “telling Republicans to vote for a Democratic budget.”