Democrats Can Finally Say It: To Hell With Cheri Jahn 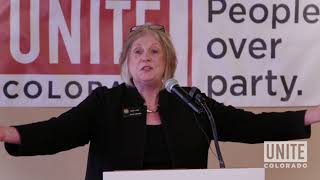 As the Denver Business Journal’s Ed Sealover reports, after losing millions in a failed bid to retain GOP control of the Colorado Senate this year, there’s a new attempt by “business community” moguls to drive a wedge into the newly Democratic chamber just wide enough to stop disfavored bills–and it’s headed by one of the figureheads of 2018’s biggest flop in Colorado politics, the so-called “Centrist Project.”

LIFT Colorado, a new organization that will seek to recruit candidates with business backgrounds to run for public office and will help train local business leaders as well on how to advocate for policies to their local governments or to the Legislature. The group is the brainchild of term-limited state Sen. Cheri Jahn — a Wheat Ridge business owner who left the Democratic Party one year ago to become unaffiliated because she was tired of politics trumping policy among elected leaders — but its rollout at the law offices of Brownstein Hyatt Farber Schreck LLP demonstrated that it will have significant backing among both business leaders and politicos.

Jahn, who received $200,000 in seed money from Anadarko Petroleum to launch the organization, [Pols emphasis] said the non-partisan organization will identify people to run for office beginning with the municipal elections of next fall, will provide training and support for them and will ensure that business leaders can have a connection to local policy-makers. The five-woman executive board for LIFT (Leaders Innovating for Tomorrow) consists of executives from the banking and real estate fields as well as a voting-rights expert and will lead the initial efforts with an eye beyond 2019 to the 2020 legislative races as well.

Outgoing Sen. Cheri Jahn was always a poor fit in the Democratic Senate caucus, and served as the go-to “Democrat” for pro-business lobbyists looking to scuttle all kinds of Democratic legislation they didn’t like from paid family leave to small business discrimination protections. Jahn’s disaffiliation from the Democratic Party to join the so-called “Centrist Project,” which evolved into the Unite Colorado slate of nominally unaffiliated candidates, was a strategic blunder that helped make Jahn the face of one of the least successful political experiments in recent Colorado political history.

Sealover reports on several telling usual suspects who were in attendance for the launch of Jahn’s new organization, including former GOP Senate President Bill Cadman and Lynn Granger of Colorado Concern. Both Anadarko Petroleum and Colorado Concern were directly involved in the failed defense of the GOP Senate Majority through via the Colorado Economic Leadership Fund and the Business Opportunity Fund. Cadman, of course, was the mastermind (and major vendor) for Republican Senate campaigns before he went to work for Whiting Petroleum.

In summary, LIFT Colorado is a collection of Colorado political losers and bad actors, including the same people who just lost the GOP Senate majority in 2018–repackaged behind one of the state’s least influential outgoing lawmakers. Because Sen. Jahn caucused with Democrats in the Colorado Senate after she disaffiliated from the party to join the Centrist Project, there was a residual obligation on the part of Democrats to handle Jahn with deference even while she publicly disparaged them in return.

As of Election Day, Democrats no longer have to be nice to Cheri Jahn.

And that’s a good thing for everybody.