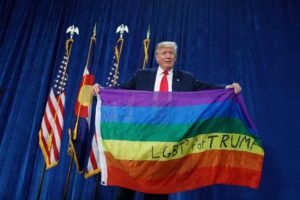 A featured story today from the former Colorado Statesman’s Ernest Luning announces the rebranding of what has been known up to now as the “Centrist Project” into a vehicle to openly support the candidacies of several “unaffiliated” candidates for the Colorado General Assembly:

The nonprofit formerly known as the Centrist Project, a group working to elect nonpartisan officials nationwide, on Monday unveiled a slate of four unaffiliated Colorado candidates running this year for the Legislature in the opening salvo of its assault on the two major parties’ unbroken rule of the state’s government. It also announced it’s changing its name to Unite America and will call the state-focused organization Unite Colorado.

The slate includes challengers against the No. 2 Republican in the Senate and a House Democrat — Senate Majority Leader Chris Holbert, R-Parker, in Senate District 30, and state Rep. Matt Gray, D-Broomfield, in House District 33 — and two candidates for open House seats currently held by Democrats, in El Paso County’s House District 18 and Adams County’s House District 31. Those seats are represented by state Reps. Pete Lee, D-Colorado Springs, a candidate for an open Senate seat, and Joe Salazar, D-Thornton, a candidate for attorney general, respectively.

We’ll start with a fundamental point, long suspected about the so-called “Centrist Project” but proven now with this announcement: this organization is fielding candidates in swing Democratic-held House districts in order to split the Democratic vote and elect Republicans. That is the only raison d’être that makes any sense based on the easily predictable outcome. From everything we can see, the inclusion of a challenge in Senate Majority Leader Chris Holbert’s beet-red GOP district is a diversion meant to distract from the principal goal of this organization–to peel off swing voters who would otherwise vote for Democratic candidates in what’s shaping up to be an historic Democratic wave election.

We’re not going to impugn the motives of individual candidates or the (in some cases disaffected) former Democratic staffers working on this campaign. We’re simply being frank about what the results of this effort will be, and they are obvious enough that we have to believe at some level the backers of the “Centrist Project” are fully aware of it. From a beleaguered post-Trump GOP operative’s point of view (see: Rep. Mike Coffman’s phalanx of ex-College Republican staffers), this kind of “unbranding” of a campaign with a clearly partisan motive probably sounds like a really slick idea.

But as Luning continues, that gnawing feeling in your stomach that something isn’t right about this is dead on:

“It doesn’t really matter to voters of that bloc where you stand on the issues, [Pols emphasis] or even if you align with them on issues. It matters that you’re fundamentally different than the people in office now.”

That’s Nick Troiano, a failed congressional candidate from Pennsylvania who’s now fronting Colorado’s Centrist Project, and who describes himself as “a motivated 24-year-old fiscal conservative who adheres to the core Republican values of limited government and personal responsibility.” Troiano is running candidates in three swing Democratic House districts, campaigns in which the only “successful” outcome will be to peel off enough otherwise Democratic voters to elect Republicans.

But don’t worry, because it doesn’t matter where you stand on the issues–or even if voters agree!

Even though the quote is older than yesterday, we’re shocked that Troiano allowed himself to go on the record so cynically. The so-called Centrist Project is being sold as a “post-partisan” campaign, but by the executive director’s own admission, what we’re really talking about here is a post-values campaign. The politics of ignorance. The politics of branding and slogans over reality. In every possible way, an insult to the voters this campaign is meant to appeal to.

And we’re sorry, but it’s also the politics of President Donald Trump.

One can only hope the voters in these districts can see through the deception to the cynical bottom line.

That quote will help.