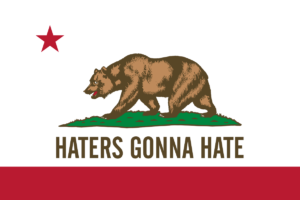 As readers know, the state of California factored oddly heavily in the 2018 midterm elections in Colorado. Colorado Republicans attempted to capitalize on the “threat” of Colorado becoming more like the Golden State in all kinds of ways, from the horrors of life in San Francisco to the supposedly wrecked California economy–and, of course, a generous helping of dog-whistle subtext about hippie liberals and their “alternative lifestyles.”

But as it turns out, the states of Colorado and California did have something in common in the 2018 elections. For Republicans in both states, 2018 was an historic wipeout that has left the state’s Republican establishments wondering what the future (if any) looks like. As Politico reports:

In the wake of a near-political annihilation in California that has left even longtime conservative stronghold Orange County bereft of a single Republican in the House of Representatives, a growing chorus of GOP loyalists here say there’s only one hope for reviving the flatlining party: Blow it up and start again from scratch.

For anyone with an understanding of California politics, the idea of the conservative bastion of Orange County failing to send a single Republican back to Congress for 2019 is practically unthinkable. California’s Democratic majorities in the State Assembly and Senate are now supermajorities–a critical hurdle since California requires a two-thirds legislative majority to pass a budget. California’s blue wave, like Colorado’s, delivered a sweep of statewide races to the Democrats.

“I believe that the party has to die before it can be rebuilt. And by die — I mean, completely decimated. And I think Tuesday night was a big step,’’ says veteran California GOP political consultant Mike Madrid. “There is no message. There is no messenger. There is no money. And there is no infrastructure.” [Pols emphasis]

It’s striking to us how you can change the name “Mike Madrid” to any number of veteran Republicans in Colorado, and the quote above would remain generally accurate. When Colorado Republicans warned that Colorado would become “like California” if Colorado Democrats won, it wasn’t just a warning about the culture.

They foresaw their own destruction. And they were right.

As we said during the campaign, demonizing California was a strategy fully dependent on cultural prejudice and a kind of weird talk radio intra-American xenophobia that was never going to appeal to a majority of Colorado voters. In 2016, less than 43% of Coloradans were born in the state at all. Not only did the “Radicalifornia” message miss the mark, it helped cement the Colorado GOP’s image of being ignorant and out of touch.

In both states, the results speak for themselves.