Get More Smarter on Friday (November 16) 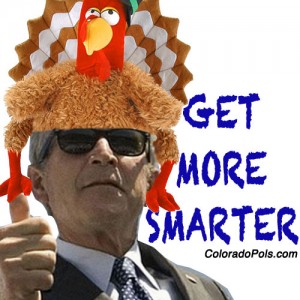 If you lived in Canada, you would have already celebrated Thanksgiving (and, presumably, you wouldn’t be the only person still in your office today). It’s time to Get More Smarter. If you think we missed something important, please include the link in the comments below (here’s a good example). If you are more of a visual learner, check out The Get More Smarter Show.

► President Trump is no match for the First Amendment…at least for today. As CNN reports about CNN:

CNN’s Jim Acosta will return to his post at the White House on Friday following a court ruling that forced the Trump administration to reinstate his press pass.

The ruling by federal judge Timothy J. Kelly was an initial victory for CNN in its lawsuit against President Trump and several top aides. The suit alleges that CNN and Acosta’s First and Fifth Amendment rights were violated by last week’s suspension of his press pass.

Kelly did not rule on the underlying case on Friday. But he granted CNN’s request for a temporary restraining order. And he said he believes that CNN and Acosta are likely to prevail in the case overall.

Speaking outside the court, Ted Boutrous, an outside attorney representing CNN, said “this is a great day for the First Amendment and journalism.”

► As the Denver Post reports, Colorado is on the verge of adopting new standards for vehicle emissions:

A Colorado commission appears likely to decide that new cars sold in the state have to emit fewer greenhouse gases and get better gas mileage starting in 2022.

The nine-member Colorado Air Quality Control Commission is scheduled to vote Friday on a set of low-emission vehicle standards proposed by Gov. John Hickenlooper. The Democrat mandated in June that the commission — composed of his appointees — adopt the rules by the end of the year.

Opponents say the new statewide standard, which is based on California’s rules, would make cars a lot more expensive without making them a lot cleaner.

Opponents say the proposed standards will raise the average price of vehicles in Colorado, while supporters of the change say drivers will save thousands of dollars on fuel costs.

► The margins of victory in many Colorado races have changed quite a bit since Election Day. Updated numbers from the Colorado Secretary of State show that Democrat Jason Crow defeated incumbent Republican Mike Coffman in CO-6 by better than 11 points.

► Colorado Sen. Cory Gardner is sounding more and more like President Trump every day. Gardner has been on the post-election talk radio circuit and is working very hard to convince himself that 2018 was not a wave election for Democrats. Gardner’s talking points aren’t backed up by reality, as Republican-aligned polling outfit Magellan Strategies explains. Unaffiliated voters in Colorado made themselves very clear in 2018.

► As CNN reports, President Trump is acting like a man who knows that a hammer is coming for him:

President Donald Trump is acting like he knows something about the Russia investigation that the rest of America has yet to learn.

His Twitter explosion on Thursday targeting special counsel Robert Mueller — his “thugs” and his “witch hunt” investigation — came without an apparent immediate cause.

But Trump’s temper apparently boiled over after meetings on three successive days between the President and his lawyers as they work out written answers for Mueller about alleged collusion between his campaign and Russia in the 2016 campaign.

The Washington Post reported on Thursday that there are at least two dozen questions about events that took place before the 2016 election.

“There are some that create more issues for us legally than others,” Trump’s lawyer Rudolph Giuliani told the paper. Some questions were “unnecessary” and others were “possible traps” or might be irrelevant, he said.

Giuliani’s striking complaint about a perjury trap appears to raise the question of why he might be worried about such an issue — if the President were simply to tell the truth, in answers that will be scrubbed by his legal advisers.

A feeling of impending doom seems to be a common theme at the White House, as Politico explains:

…half a dozen people in contact with the White House and other Trump officials say a deep anxiety has started to set in that Mueller is about to pounce after his self-imposed quiet period, and that any number of Trump’s allies and family members may soon be staring down the barrel of an indictment.

► Colorado Republicans continue to lob ethics grenades at Gov. John Hickenlooper, though it’s not at all clear that Hickenlooper did anything wrong.

The $567 million school bond issue in Jefferson County that looked like a loser on election night is now officially a winner.

The final count for measure 5B is 150,595 voters in favor and 149,058 against, according to the completed tally posted Thursday on the Colorado Secretary of State Office’s website. The total votes included those cast in Jefferson and Broomfield counties, said Beth Clippinger, spokeswoman for the Jefferson County Clerk and Recorder’s Office.

“We are done counting ballots. There is nothing left to count,” Clippinger said. “5B wins.”

The 1,537-vote margin is large enough to avoid a recount, Clippinger said. The vote will be officially certified Nov. 27, she said.

► John Elway hasn’t been very good at putting together a winning roster for the Denver Broncos. The candidates he has been supporting for elected office in Colorado aren’t doing well, either.

► Wait, what? Two key counties in Florida apparently finished a manual recount of ballots in two hours? From the Washington Post:

Broward County, which had stumbled through a rocky machine recount, rolled through the state-mandated hand recount in just two hours Friday morning with only minimal arguments from partisan lawyers. Just to the south, Miami-Dade — the state’s most populous county — completed its hand recount at almost the same time.

► House Democrats picked up another seat as ballot results were finalized in Maine, marking the first federal race in U.S. history to be decided by “ranked-choice” voting.

Republicans have now been ousted from every Congressional district in New England; Maine Sen. Susan Collins is the last remaining Republican in the area.

Now, if someone could just get rid of the New England Patriots…

► Democrats in Colorado’s Congressional delegation are split over whether to support Nancy Pelosi as Speaker of the House.

► The Colorado State Board of Education says Adams County School District 14 is no longer capable of managing itself.

► President Trump is in an even shittier mood than normal.

► As the New York Times reports, President Trump may be souring on Vice President Mike Pence.

► It bears repeating: This is going to be a very long two years for Sen. Cory Gardner (R-Yuma).