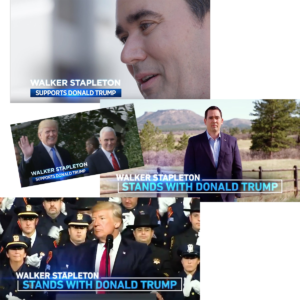 The Denver Post’s Jon Murray reports on a post-election poll from GOP-aligned pollster Magellan Strategies out today, documenting how backlash over President Donald Trump’s election and controversial term in office since 2016 directly translated to historic defeat for Republicans at every level in Colorado in 2018:

The phone poll, conducted by a Republican firm Nov. 7-9, confirmed that unaffiliated voters — whose participation surged to historic levels for a midterm election — broke with tradition by favoring Democrats by huge margins on Nov. 6. Unaffiliated voters who turn out in midterms in Colorado tend to break for Republicans, while leaning left in presidential elections.

And unlike previous Democratic electoral routs, the poll suggests, it’s less likely Republicans will be in a position to bounce back in two years, when Trump is up for re-election.

“What is still the most important voting bloc is all of the unaffiliated voters,” said David Flaherty, the founder and CEO of Louisville-based Magellan Strategies. “And the bottom line is that boy oh boy, they did not like what Republicans were offering up. And boy oh boy, they do not like this president. … It could not have been a darker day.”

Midterm losses for the party holding the White House are almost always certain, but there’s a reason why the “blue wave” of 2018 crested higher in our state than most. Despite the fact that Trump lost Colorado in the 2016 presidential election, Colorado Republicans deliberately embraced Trump on the campaign trail. This began in earnest during the Republican gubernatorial primary, in which eventual nominee Walker Stapleton made “supporting President Trump” his principal message to the party faithful. Whether motivated by sheer hubris or a misguided calculation that holding the Republican base together was more important than alienating swing voters hostile to Trump, the result was disaster.

Colorado Republicans willfully, consciously, happily followed President Trump into the abyss. Responsibility for this mistake is both broad and deep. From Stapleton to the state party brass to every Republican candidate who made the choice either to stand with the President or remain silent–they earned this outcome. They chose it.

And the unaffiliated voters of Colorado who decide elections will not soon forget.