An Open Letter to Chairman Call

I'm not your typical terrorist:  a fifth-generation Coloradan, a Yuma County native and graduate of a small rural K-12 school, Idalia High School.  Upon return from college I settled in Wray where I raised my three children.  I was active in local activities – a founding member of a team of community activists that reshaped our small town of 2,000 in the toughest of times: the agricultural recession of the 80's.  Through those times our small group of leaders built a multi-million dollar community center, a new school, hospital, community-owned daycare center, refurbished airport and extended living facility.  We were chosen as one of ten 'All-American City'  award recipients in 1993, the smallest city at the time to receive the award.  We were chosen as one of ten rural communities in the United State to participate in an intense, two-year leadership program funded by Pioneer Hi-Bred International, "The Search for Solutions". 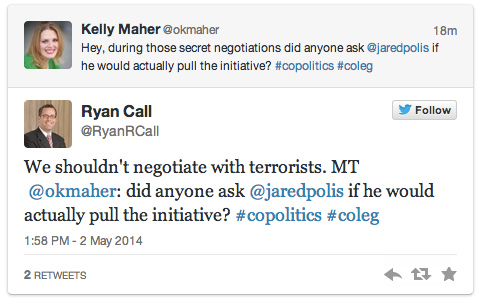 We accomplished all of this through the toughest of times; we were successful because we created a vision for the community.  It's not that we didn't have our detractors, we did.  But their arguments against 'change' were no match for a solid road map that redefined our community.  In short, we knew we had to embrace change – or wither on the vine.

We consciously made the choice to thrive, not just survive.

Yuma County has been blessed with an abundance of natural resources: our water resources from the Ogallala are second to none.  Fertile soil and significant natural gas reserves turned this vast prairie into one of the richest breadbaskets in the Great Plains.   At one time Yuma County was the largest corn producing county in the nation.  Today, the corn production feeds one of the largest feedlots in the world, originally built by the Monfort family and is now owned by Brazilian interests.  Our vast open space served as an ideal location for the explosion of pork production facilities.  Today, the majority of those facilities are owned by the Chinese Pork Giant Shuanghu.

It's unfathomable for me to imagine that some 20 years hence from these enormous achievements that Wray would be ground-zero for the secession movement.  I attribute the shift in mindset almost exclusively to how the party leadership has morphed over the last two decades.  Long gone are the rural titans once revered in the legislature: Bud Moellenberg, Bev Bledsoe and Fred Anderson.  Absent is a voice that reminds us that we aren't independent but interdependent with our urban counterparts.

We've come a long way from my 4-H and FFA days where I earned my State Farmer Degree with a modest 50-sow operation three decades ago. My parents and grandparents were Republicans.  The old kind.  Conservationists. The kind that understood math, that coveted local governance, that understand the importance of infrastructure investment and supporting the 'common good'.  The kind that encouraged personal initiative.  The kind that understood the value of the most socialist of organizations: the local farmers cooperative, the local telephone company, our community hospital and our rural electric association.

A member of the Yuma County Planning and Zoning Commission for 12 years, serving as its Chair for eight years, I understand the importance of local control – which in most rural areas is a de facto economic development group. It's why we have livestock facilities in Yuma County and not in Boulder; it's why, even with the passage of a Local Control Initiative, natural gas production will continue on the eastern plains.  And Boulder, rightly so, will focus on regional economic drivers that produce lasting, good paying jobs.  You probably know this, but the high-tech industry on Colorado's Front Range produces twice the number of jobs per dollar of state GDP as does the natural gas industry.

In 2009 I left your party – no longer interested in the parties obsession with their social agenda, and seemingly devoid of any economic vision for Colorado other than doing the biding for any monopoly power in the state.  A party that wrapped itself in the flag and shouted Free Markets! from the top of your lungs – even though the mythical free market was non-existent.

For the past decade I have dedicated my time to supporting public policy and co-founded organizations that offer new opportunities for rural Colorado.    Starting with Amendment 37, an idea borne by a Boulder terrorist organization that believed Coloradans should have access to energy derived from our infinite, clean wind, solar and geothermal resources.  The passage of Amendment 37 – although vehemently fought by the very rural interests that would be the benefactors and the state Republican party – passed.  Today, we've only seen the tip of the iceberg as to what's possible in job creation and new tax base in our rural communities via the renewable standard the party so loathes.  Billions of dollars of investments in wind projects in Weld, Logan, Phillips, Kit Carson, Lincoln and Prowers counties. Large investments in solar have been made in the San Luis Valley and Pueblo County.  Investments indirectly financed by these terrorists you referred to today. Billions in new tax base without the locals having to barely lift a finger.  The national Renewable Fuels Standard supports biofuel projects in Yuma, Logan and Weld County.  Colorado State University is one of the leading 'green' universities in the nation.  Even rock-ribbed conservative Garfield County has dedicated itself to self-sufficiency with their CLEER initiative (Clean Energy Economy for the Region).  The Delta-Montrose Rural Electric Association is developing small hydro, Aspen Ski Company is capturing coal mine methane to power its operations and La Plata Rural Electric Association in Durango is developing solar gardens in the region.

All this, while there is reportedly a War on Rural Colorado by Front Range terrorists urban legislators.

There is no reason that every eastern Colorado county couldn't benefit from energy production; every county in the state has a resource on par with Weld County natural gas reserves.  And it should be our collective vision that as an energy state, all forms of energy development are supported.

The men and women you labeled as terrorists yesterday are the same terrorists that have fought – and won – three epic battles with our regulated, state monopoly, Xcel Energy, to detach from their centralized system and allow technology and entrepreneurship to create a 21st-century blueprint for community power.  They are the same terrorists that launched Xcel's WindSource program – the precursor to the foundation of the renewable energy standard we have today.

It's hard to miss the irony that it's your terrorists that are fighting monopoly powers and democratizing our energy grid – and neo-conservatives that fight to defend the said monopolies status quo.

It's a tragedy that but not for certain Congressional members deep-seated hatred of the Obama administration we could have become the epicenter for a regional, distributed generation demonstration in partnership with our nation's military.  Home to five military installations and the state with the highest percentage of retired and active military in the US, the mission of the DOD to promote regional resiliency while making their installations net-zero was literally at our fingertips.

Our future won't be found at the tip of a drill bit drowning in fluid. To the extent natural gas plays a role in our state economy, it should be done in a responsible way.  Appropriate severance taxes, zero-tolerance on methane emissions and adherence to local regulations.

My old party – your party – has become a paradox.  What I described above would have, twenty years ago, been conservative talking points:  Do no harm. Leave things better than you found them. A well-funded commons. Long-forgotten are the party's roots in Teddy Roosevelt, Nixon's establishment of the EPA and George H.W. Bush's successful cap-and-trade program for

acid rain.  George W. Bush gave us the nation's Renewable Fuel Standard and as Texas Governor, he established the largest state wind portfolio in the nation.  It was the Bush Supreme Court that determined carbon dioxide a pollutant that should be regulated. Former White House General Counsel to George H. W. Bush, C. Boyden Gray is today fighting to remove cancer-causing aromatics from our fuel supply and replace them with advanced biofuels.  Barry Goldwater, Jr is fighting for the Arizona solar industry – and in Georgia, the Tea Party and Sierra Club have found common ground.  Mitt Romney pioneer the northeast RGGI cap-and-trade system before party pressure and Presidential aspirations reversed his course.

I don't envy your challenge.  We desperately need a functional political system that serves the best interests of its constituents. One that understands that a sound regulatory system can go hand-in-hand with a robust economy.  Our challenges are immense and our opportunities vast.  We owe it to every Coloradan to get this right.  On a personal level, I now have two small grandchildren, the seventh-generation of my family to call Colorado home.  I'm committed to fighting for their future. And as counter-intuitive as this may sound, the blueprint for creating a rural renaissance in Colorado – and how to build a bridge between the 'two Colorado's" exists today – in the heart of the failed secession movement.

We need a very different narrative – and it should start at the top.  For now – and under your definition – I am a terrorist.  Perhaps in time we can transcend that relationship to one of ally.