Trump Doesn’t Know the Guy He Already Said He Knows 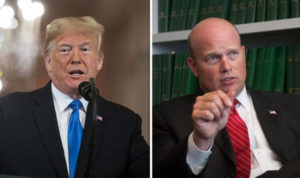 President Trump tries out his newest version of “I didn’t do it.”

“I don’t know Whitaker,” the president told reporters, but added that he is “highly thought of” and a “highly respected man.”

The New York Times reported in September that Whitaker, then the chief of staff to Attorney General Jeff Sessions, had “frequently visited the Oval Office” and that Trump had called him to offer “reassurance that he has faith in him.” The Washington Post also cited a senior administration official who said Whitaker met with Trump in the Oval Office more than a dozen times, usually alongside Sessions.

Trump has also previously said that he does actually know Whitaker.

“I can tell you Matt Whitaker’s a great guy,” he said on an interview on “Fox and Friends” on Oct. 11. “I mean, I know Matt Whitaker.” [Pols emphasis]

This all might just be a really clumsy attempt by President Trump to throw Matthew Whitaker under the bus in the midst of heavy criticism over the appointment…but it is a remarkably lazy effort. The odds are pretty good that somebody has at least one photo of Trump and Whitaker together.

Of course, it’s also not out of the realm of possibility that Trump doesn’t remember his interactions with Whitaker, which is also terrifying.